My local fishing club is celebrating it's 100 year centenary this year and our club chairman decided he wanted to mark the occasion by producing a commemorative brochure detailing some of the history of the club. A couple of months ago I was fishing on the local canal and who should come along but our chairman, he stopped for a chat in which he outlined his plan for the brochure. I happened to mention that in an issue of Angling Times that I have in my collection, there was a double page spread about our club, he said that it would make an ideal double page spread for the brochure, so I promised to look it out for him.

What has this to do with the heading of "Richard Walker Barred" you may ask, well, as I could not remember which issue the feature on our club was in I had to look through all of my old Angling Times until I found it. The problem with doing that is, that as you look through the different issues various headings and articles catch your eye and you end up reading them and the task takes two or three times longer than it should.

One such headline caught my attention and it read :- Walker barred from Royalty This immediately drew my attention and I had to read the piece, it appeared on the front page of the Angling Times, issue number 426, Friday, September 1st, 1961 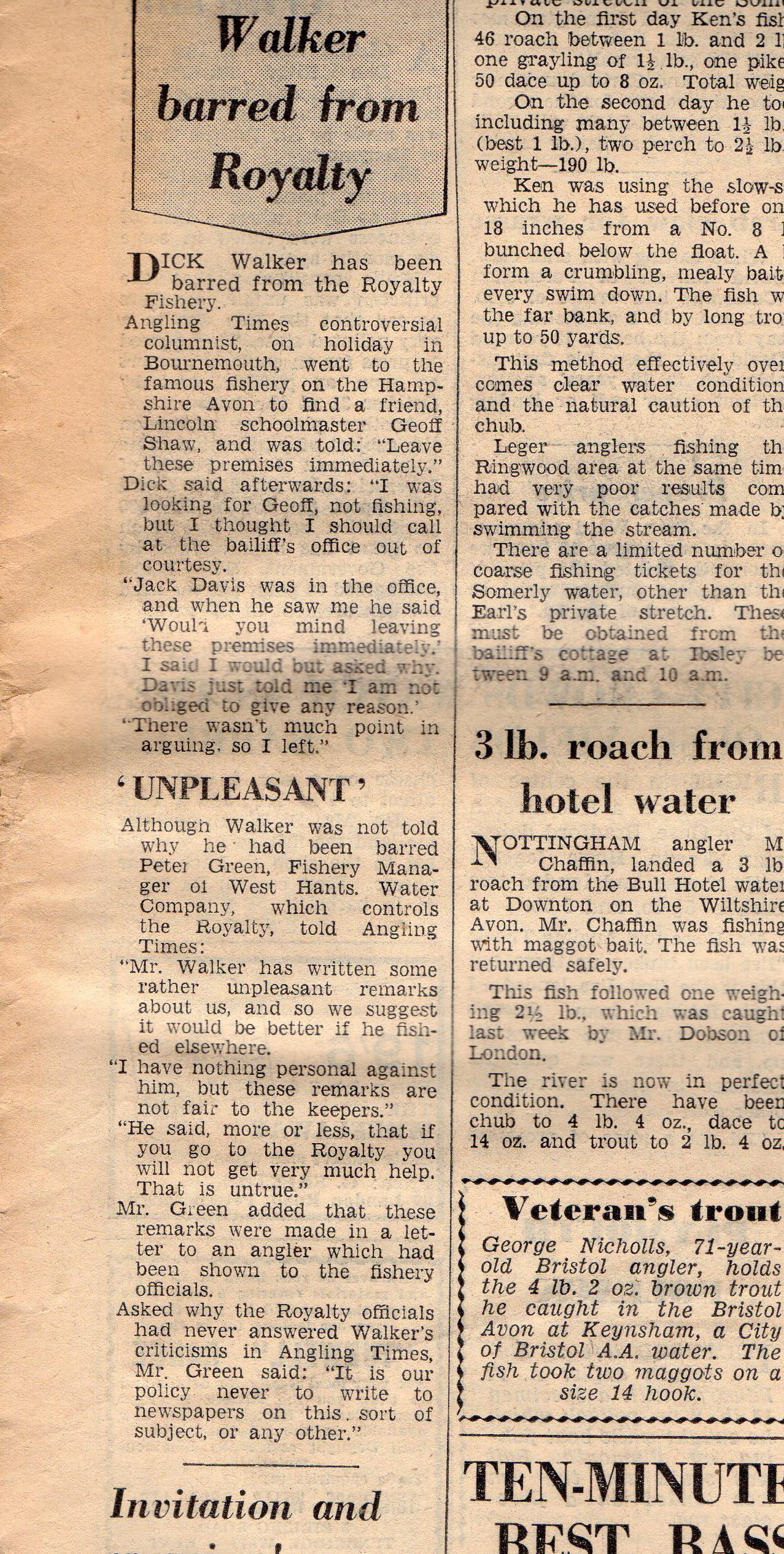 For those not able to enlarge or zoom in on the text, it reads as follows :-

Dick Walker has been barred from the Royalty Fishery

Angling Times controversial columnist, on holiday in Bournemouth, went to the famous fishery on the Hampshire Avon to find a friend, Lincoln schoolmaster Geoff Shaw, and was told: “Leave these premises immediately.”

Dick said afterwards : “ I was looking for Geoff, not fishing, but I thought I should call at the bailiff’s office out of courtesy.

‘Jack Davis was in the office, and wen he saw me he said “Would you mind leaving these premises immediately’ I said I would but asked why. Davis just told me ‘I am not obliged to give any reason.’
“There wasn’t much point in arguing, so I left”

Although Walker was not told why he had been barred Peter Green, Fishery Manager of West Hants. Water Company, which controls the Royalty, told Angling Times :

“Mr. Walker has written some rather unpleasant remarks about us and so we suggest it would be better if he fished elsewhere.
“I have nothing personal against him but these remarks are not fair to the keepers.”
“He said, more or less, that if you go to the Royalty you will not get very much help. That is untrue.”

Mr. Green added that these remarks were made in a letter to an angler which had been shown to the fishery officials.

Asked why the Royalty officials had never answered Walker’s criticisms in Angling Times, Mr. Green said : “It is our policy never to write to newspapers on this sort of subject, or any other.”

I have had a look through the posts in the Dick Walker thread and I can not see any mention of this before, apologies if it has and I have missed it. I hope it is of interest and adds another little bit of history to the memory of our greatest angler

Walker was not one to mince words, was he?

Interesting to read snippets from the other articles as well.
Oh for the days when the angling papers were filled with proper news and interesting, well written articles, rather than the constant promotion of products we have these days!
Top

I fully agree, the angling press back in those days was far, far better than these days. Perhaps it seemed more enjoyable to read because the likes of Dick Walker, Peter Stone and the Taylors were the pioneers in fishing for big fish and their weekly articles were devoured avidly. These days there seems to be a new expert every week, if someone caught a fish on a turnip the next week there would be an article by an expert outlining the definitive turnip rig.

John Harding wrote: ↑Thu Apr 04, 2019 4:22 pmnext week there would be an article by an expert outlining the definitive turnip rig.

Just one more cast love, and I'll be on me way home

Yes I don't think I have missed much by cancelling my subscription to the AT several decades ago,, when it was black and white. Fortunately there is a lot of great coarse fish reading out there from earlier writers. A lesson for me from the TFF is to largely abandon second hand/ charity bookshops and buy the quality book online. And why not indeed?
Trouble is, the fish just don't read the books......
John Harding
Top

John Harding wrote: ↑Thu Apr 04, 2019 4:22 pm...if someone caught a fish on a turnip the next week there would be an article by an expert outlining the definitive turnip rig."

Only one?
"Write drunk, edit sober" - Hemingway.
Hemingway didn't have to worry about accidentally hitting "submit" before he edited.
Top

Penned by Baldrick 'Cunning plans with a turnip' ?
Top

Thanks for showing us, it tickled me...

Quite a stuffy response from Mr Green. Ive heard Walker could upset people. Wonder how he'd of fared here