A possible date for an early Speedia

The apropos of nothing ( other than WR ) 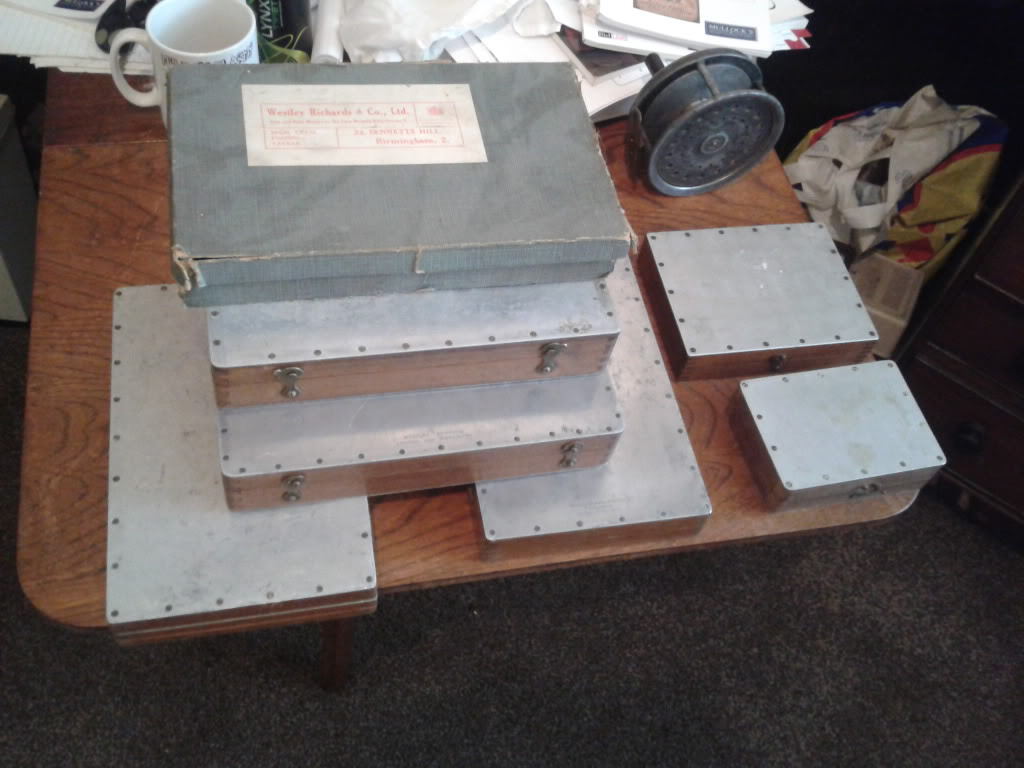 For a long time I did think WR Products was Westley Richards but it seems it's not so.

There's precious little known about the company, nor can I find anything in a search of Companies House. It wasn't unknown when I was young for a firm to add 'Ltd' to their company title just to imply they were a company with registered limited liability and therefore big and successful. I don't know it this worked....claiming that you only accept limited liability hardly sounds like a great advert to me, but it did go on.....

I once held a very early reel that belonged to RichardC...it seemed made to a higher standard by a highly qualified engineer and hand assembled, rather than just pressed together on a production line, as the later reels were. I have no idea if this reel was pre-War, but now that we know the 'pill' centred reels were most probably 1951...that's just 6 years after the war ended.......maybe those early reels are pre-War after all. Chavender has found what we believe to be earlier reels still, detatchable handles riveted-on feet....surely they are pre-War?

We don't even know who made them...not a name, nothing.

It does occur to me that they might have been cast elsewhere. Casting aluminium is a dirty, noisy job and there has to be a limit to what could have been done in suburban shed!

OK, it was a big shed...but it was in a semi-detached Shepherds Bush back garden, not an industrial estate.

Using Google earth historical setting I found this from 1945:

In the original photo the building outline was far clearer, it hasn't translated well in Tinypic. The red tag is in the wrong place, I can't move it but the yellow one sits on a possible site for the factory......which is now a new-built house. In the 1999 image you can clearly make out a ridge-roofed unit with an entrance in Westville Road.

It isn't that built up is it?.. in 1945 there's the possible outline of the factory unit there already and just a school nearby, which is still there to this day and nowadays there is a factory unit called RPM in Goodwin Road who give their address as 'The Old Treacle Factory'....maybe the area was once more industrial after all?
Last edited by Nobby on Tue Jul 28, 2015 11:06 am, edited 2 times in total.
}<)))'> Nobby

Nobby, I once read an old angling magazine with an advert for W R Products which showed the early Speedia and a fly reel plus some other aluminium items including the reel fittings often seen on B James and Sharpes rods.

I believe they also made some small items for boats such as cleats and other deck fittings.
I have searched high and low for the magazine without success and I am now wondering if it was an angling mag or an old boat mag I was reading. It could have been an early boat show review.

Hi Wal...do let me know if it ever turns up. Some of their boxes also mention rod fittings.

I wish I'd had a PC OS with the Snipping Tool years ago.....I might have bothered to get Street View images of the unit before it got knocked down.......
}<)))'> Nobby

when I looked in the past there wasn't a clear view of the front of the workshop (which was directly behind the sales address .but the rear view from memory had two blue cargo doors ,but no signs (unless they'd been removed by then ~2007ish)

I do have a first model early type speedia reel and its very light compared to later ones & is definatly machined rather than cast .but they wasn't perfect they only have 8 line lay pins which was very thin and prone to buckling ,as mine had obviously fell foul of at some point as half the line lays was bent and the other half replaced by nails .I did recently mada a boo boo with it ,I replaced the line lays with thicker later ones and got the spool back in working order .I had a second model too ,that came with just one handle so I borrowed the handles of the broken reel (as both the early model mk1 & mk2 had the same screwed on handles) thing is though I forgot they belonged to my mk1 ,and gave the mk2 up as a charity raffle prize ,so I let it go as is ,well i'd given my word on giving it as a prize .so now I have a mk1 without handles & looking for another mk1 or 2 to complete the reel .

because of the problems with the line lays on the mk1 it probably had a very short production run before this was rectified on the mk2 (went from 8-10 line lays and thicker pins) and the mk2's was again a short run before going to fixed handles .I beleave the mk1's and 2's span from the mid 40's to around 1950 or so .then various incarnations of the mk3's lasted until the 60's ,then the improved models came about (the mk4's) ran again in various incarnations (a few minor improvements along the way ) .you see lots of the later improved models and quite often see mk3's but mk2's and mk1's are rarer .I hope to maybe oneday find a early box or receipt that's dated for the 40's to nail down the early reels dates

I lost some info i'd found on a old hard drive that failed including good pictures of the building and copy's of the bankruptcy company details etc ,and I wish i'd followed up by visiting the place before the workshop was pulled down ,I would of loved too snoop through the windows or had a good nose around .but alas I never did and any more info went with the building .& I lost my chance to confirm the details i'd gathered and possibly get confirmed dates etc .my plans was to at least put it all together for a online history or a pdf book .but all I have is anecdotal and speculative information collected over many years and lots of late nights down in the bowels of the Tinterweb scratching around in the dark for snippets.
I try to be funny... but sometimes I merely look it! Steve
Top

So they went bankrupt then? How sad. Any recollection of what year, Steve?
}<)))'> Nobby

Its a sad story centrepins went out of fashion , how things change.
They say if you wait long enough thinks come back around again, never a truer word.
Someone should start making these again in my opinion

1986 I recall it might of been a self declaration ,rather than being enforced ,but how long they was in decline before throwing in the towel .by a coincidence I believe mordex went bust the same year .but the eighties was a tuff time for small company's .

sad but that's how thing went I guess ,being mostly known for centrepins and them falling out of favour for a new wave of cheap light (graphite bodies) fixed spooled reels in the late seventies early eighties finished of what had become a dwindling trade in centrepins ,if they'd lasted a few years more might of been saved by the revival that started with john wilsons go fishing (Anglian Tv ,& ch 4) where he often fished with a centrepin & a little later a passion for angling ,that saw a rise in interest in centrepins again .
I try to be funny... but sometimes I merely look it! Steve
Top

Yes that's right chav it all started with john Wilson, if only m8.
Top

Mind you Marco ( Modern Arms) technically only closed down a few years ago......they were owned on paper by two people in Dorking, Surrey, but had no assets whatsoever.

I guess when they stopped making tackle would be more exact than when they were closed down, then.
}<)))'> Nobby