Winging its way to me is this wide arbour Speedia reel which was up for grabs on the well known internet auction site.

For some strange inexplicable reason the seller put the end of auction time at 01:30 this morning. I had been watching it for a few days as it was in good condition and sat at a low price. I made the decision to stay up on the offchance a bargain was in the offing, although fully expecting the price to double or treble around 22:00 - 23:00 as people went to bed. After waiting with a few cups of tea and heavy eyes I was surprised to see at 01:00 it was still at its low price, and anticipation started, although common sense dictated that a flurry of bids would come in over the last minute. Last minute I put a bid on and waited for the inevitable gazumping in the last second as someone with sniper software grabbed it as my highest bid was still very much on the low side. The screen refreshed , auction over, but the box was coloured green not red! Incredibly I had won, not only that but for only a pound more than the earlier low price.

Well, what a result.

I wanted one of these after being inspired after barbel fishing with Bob Brookes recently and seeing how his Mill Tackle Wensum reel behaved and it is based on this reel. 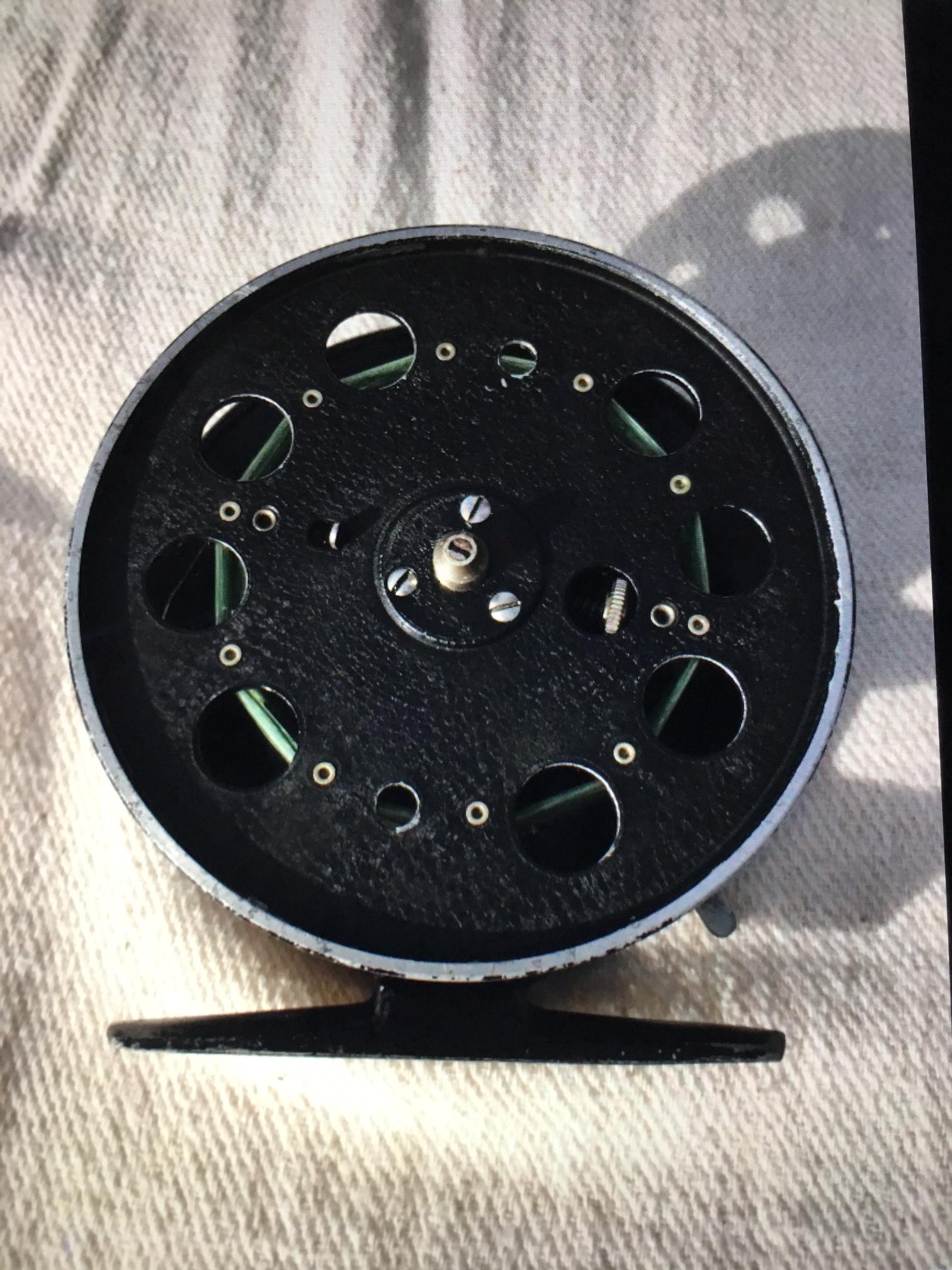 I hope I wasn't bidding against any Forum members but this was a case of the early bird and the worm......or was it the night owl in this occasion.
"We knelt side by side looking at it. I knew it was big, and suddenly it dawned on me it was more than that. It was tremendous!" - Richard Walker
Top

That item has the variable adjustable check fitted altho the handles have been taken off
at some time. Hope you enjoy the experience
Top

Yes the adjustable check was something that I wanted as the 'Wensum' version has this feature and Bob specifically pointed it out on his as a big plus.

Yes the handles have been removed. I would say that the reel has been used for trotting, held top side upwards with the thumb checking the travel in the approved manner then the reel 'batted' to retrieve, which would explain the near perfect paint job less the rim.

I wasn't put off by this and as there were quite a few early bids others must have felt the same. I can replace these short term from the bits box, but longer term I will makes some new ones on nice brass cups and screws, maybe amber coloured like the originals but with the older style flared profile, maybe bone or rosewood. At the same time I'll make a brass replacement centre piece and polish up the bare rim as a nice feature.

Good buy Neil.
Just don't hook a barbel until you have fitted some handles onto it, if you wish to keep all of your finger ends!
"Dost though love life? Then do not squander time, for that is the stuff life is made of" Benjamin Franklin
Top

Hmmmmm ....it's the hooking of the barbel which is the problem at the moment not the handles

Well done Neil, it's always nice when you grab a bargain like that, it doesn't happen that often these days on eBay. I must admit to being a real fan of Speedias, I have four, three narrow versions and one wide, with different lines for varying tactics. I love the fact that they are so light and balance well on a MK1V Avon, which tends to be my go to rod during the autumn and winter months whilst roving the upper Medway for chub and the occasional barbel. You'll get that barbel eventually

"Fishing is not an escape from life, but often a deeper immersion into it..."
Top

Well done Neil I hope you get to christen it soon!
Your one bite away from the best session of your life
Top

Crumbs guys - when I read posts like these I'm rather relieved that no one can see the stuff I fish with. I think it would make grown men cry, but still I caught dace, perch and chub on the Wye today, ending with one of five pounds on the Reuben Heaton scales. That's 4lb 11oz in real money.....
Trouble is, the fish just don't read the books......
John Harding
Top

Congratulations on the Speedia, Neil!

You will like it and I'm sure you will make some very nice new handles for it.

My narrow drum Speedia is going to be used on Saturday for perch/zander/pike fishing. A fantastic reel for the job!
Greetings from Bamberg
Martin
Top
Post Reply
14 posts