This forum is for discussing trout.
Post Reply
33 posts

This would be the time to buy the fly fishing set up and do a bit of practicing.only 8 days til the season begins.shouldnt cost much for a basic set up.fly lines don’t need to cost an arm and a leg,ok the more expensive lines are much better quality,but to just get a fly out there,there’s lines on the market for under a tenner.
Don’t cast doubt,cast out.
Top

These two trout I caught on minnow July 1986. I seem to think I had been fishing for perch originally and ended up taking these two as well. 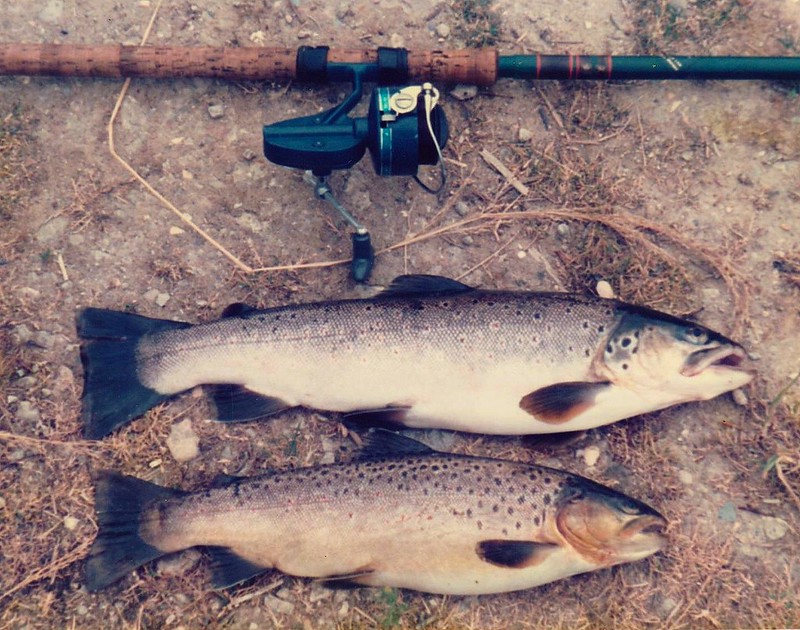 I used to do a bit of spinning in the closed season for trout on the lower reaches of River Hull. Trout were few and far between so spinning was a way of covering the water. My lure was often a Devon minnow but the outstanding lure was a Mepps Black Fury.

I also used to do a bit of worming on some small streams where you couldn't possibly get in with a fly rod. You can also free-line or float fish a worm in places where you could never present an artificial fly such as under a bridge or right under a tree.

I never found trout any more likely to swallow a bait than perch. You just don't give them too much time before striking.
Top

Reminds me of my neighbour when I lived in York. He caught a 6lb plus brown trout from the York Ouse and had it stuffed in a case above his mantlepiece. He claimed it was the Yorkshire Ouse record and that he caught it on two pound line, size 18 hook, and a single maggot. I think he caught in in the sixties or early seventies.
"....he felt the gentle touch on the line and he was happy"

The river Hull produced some amazing brown trout in the past which were definitely not stocked fish but fish that had turned predatory. From memory there were at least three which reached double figures with the best I seem to recall around 15lb. In recent years I've seen two fish round the 5/6lb mark which I've not bothered to fish for but decided to leave undisturbed. Both were very predatory.
Last edited by Phil Arnott on Fri Mar 08, 2019 4:35 pm, edited 1 time in total.
Top

They are a fascinating species capable of filling many niches throughout a river system from virtually it's source down into the tidal reaches and out into the sea. The lower reaches of many large rivers hold big trout all the way out into the estuary. Often referred to as bull or slob trout these fish I suspect roam long distances in the intertidal zone but not quite far enough out to sea to be considered anadromous or 'true' sea trout.
Top

Thanks olly,I thought the 15th of March was a uk wide thing.even more time to practise then.
When does your season close olly?up here is the 15th of Oct.
Don’t cast doubt,cast out.
Top

Depends upon how far I go from home!

Fully enclosed waters: - no close seasons for brown or rainbow ----- I think.

These are also different for salmon and sea trout for each area!!

Confused -- yep! Always have to check the Bye Laws when I go anywhere!
So on the 17th March I can fish Wessex waters - 1st April Thames - and 3rd April Southern!

Don't get me started on WHAT you cannot do & use!

I try to avoid river brown/rainbow trout fishing - salmon seasons are much simpler! So are most stillwaters.
Top

Thankfully things are far less complicated up here.i can fish for brown trout from next Friday,even though I won’t bother til some time in April when the trout have moved back into their summer lies.march trout are still pretty washed out and lethargic,especially over the past few years.the southern area close season would be suitable for more of the uk.ive found October to be a very productive month for trout too,usually when targeting grayling.

Going back to the original post,minnow fishing for trout is a truly deadly method.fishing a minnow a couple of days after a big summer flash flood when the river is still a bit coloured.the trout have to use a lot more energy to fight against the current and there’s no where near enough insect life to sustain them,add to that their predatory instincts and they are the top bait for big trout.i haven’t used the minnow jig for years and years.minnows are thin on the ground and I don’t kill fish any more.
Don’t cast doubt,cast out.
Top

Fully enclosed waters: - no close seasons for brown or rainbow ----- I think.

These are also different for salmon and sea trout for each area!!

Confused -- yep! Always have to check the Bye Laws when I go anywhere!
So on the 17th March I can fish Wessex waters - 1st April Thames - and 3rd April Southern!

Don't get me started on WHAT you cannot do & use!

I try to avoid river brown/rainbow trout fishing - salmon seasons are much simpler! So are most stillwaters.