Received a very nice surprise recently when son-in-law, Andy Bradley, presented me with a superbly hand-crafted cane landing net, which is believe to date from carp fishing's early-period; say the early-1950’s. My instincts suggest this might very well be the ex-Jack Opie landing net, the same Jack Opie who caught a 27lb 5oz fully-scaled mirror from Redmire Pool, in September 1954. According to our President May Lang, (ex-May Berth-Jones of course), all of Jack Opie's tackle was sold when he emigrated to Australia.)
What's the evidence behind this reasoning? 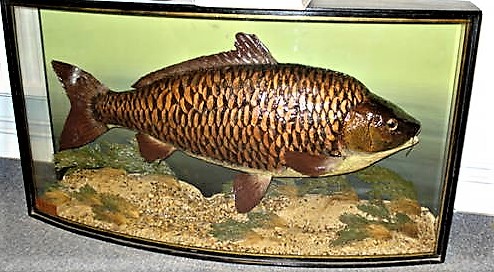 Well, Jack Opie was the good friend and fishing companion of Gerry Berth-Jones and the spreader-block and screw on this net are, to all intents and purposes, identical to those on Gerry's original landing net, and I feel certain that these items are indeed Gerry's own handiwork. Furthermore, Jack Opie arranged to have a batch of aluminium alloy blocks made in his factory, and the block on this net maybe one of those. (Very similar to Dick Walker's original design: Jack Opie worked closely with Dick Walker on certain tackle items, as evidenced by Jack's company, Metal Pressings, producing the Heron bite alarm, primarily based on Dick's original antennae idea).
The split cane arms display all the hallmarks of a very skilled craftsman: the cane itself has an almost invisible joint line; the brass hinges are beautifully crafted, and the rivets are difficult to discern, and there’s certainly no signs of hammer work or, indeed, any evidence of anything approaching a heavy-handed approach on these hinges; finally, the fittings at the top of the arms to which the cord fits, are the best I've ever seen! These are turned from two pieces of what looks like brass screwed together, providing an ‘invisible’ join where thong meets arms.

This landing net now sports a modern knotless mesh and I'd suggest the arms have been re-whipped and re-varnished. The two-piece cane handle, however, looks very original. 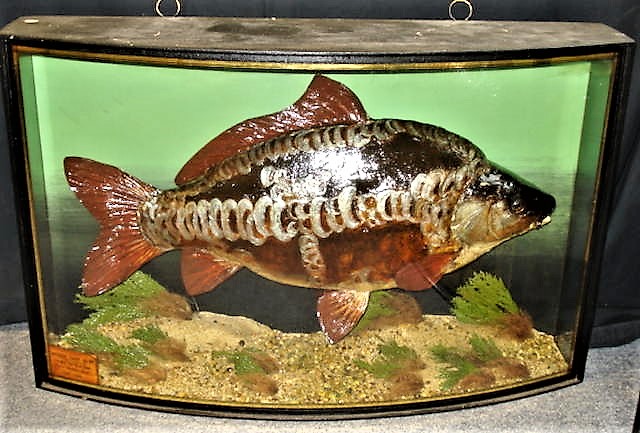 In the above John Cooper case resides another Jack Opie caught carp.

The picture below shows Andy handing it over to me, and whatever the truth of the matter, I am very, very happy with it. 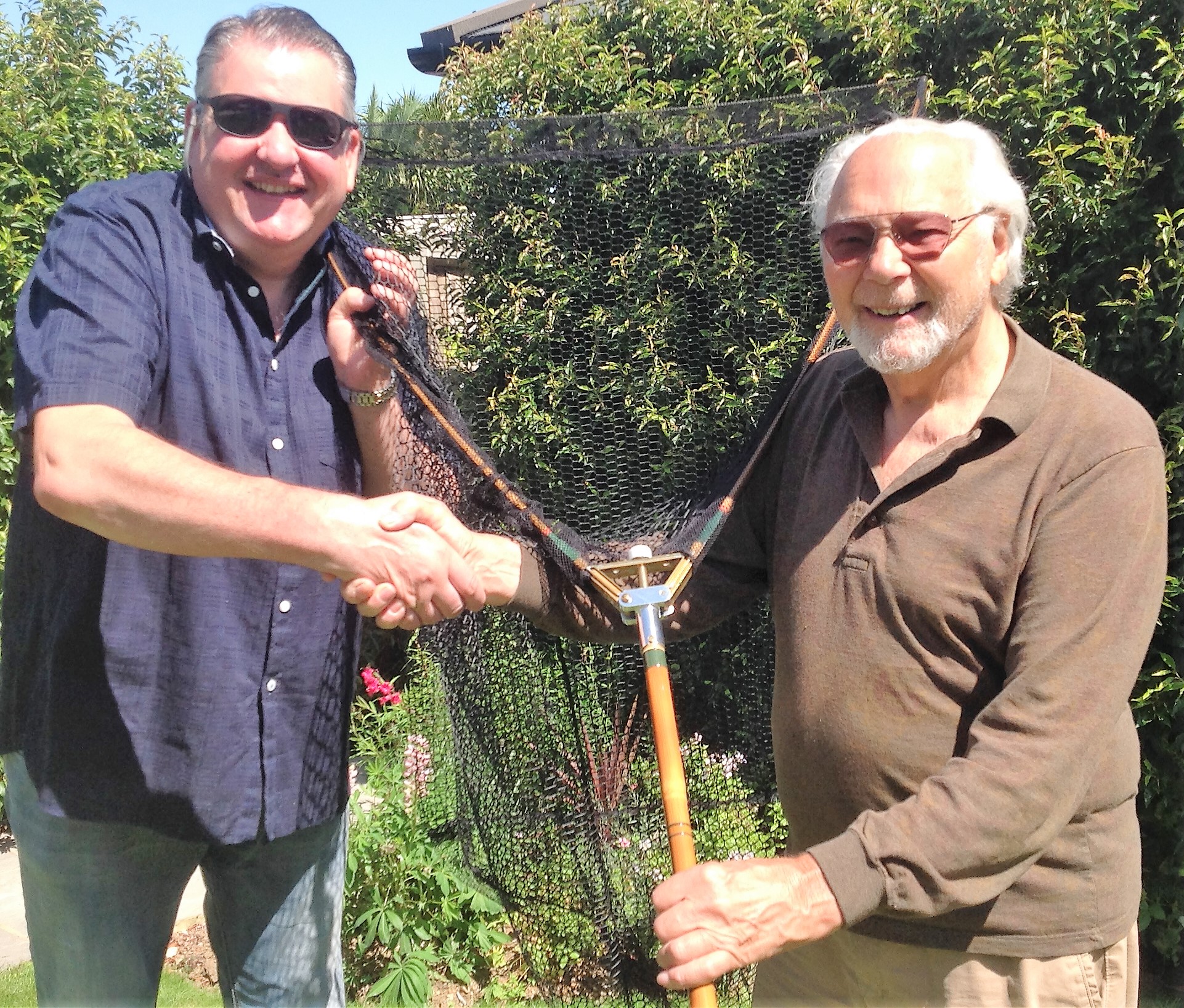 The story behind how this gift came about goes like this: After first seeing the pictures of this net on Facebook, on The Carp Anglers Refuge page, I discussed my suspicions of its provenance with my close family. Son-in-Law, Andy, tracked it down to a dealer in Kent (he is very good in such matters) and the rest is history. Jack Opie and Gerry Berth-Jones also both lived in Kent; even further circumstantial evidence to support the theory that this is indeed Jack Opie's own landing net. The dealer in question had no further information to tell Andy. So, it is a great thank you to Robin Dix for setting-up The Carp Anglers Refuge page, Robin; thank you indeed. I took the ‘Opie’ net along to Horseshoe Lake on 3rd August, as part of the Carp Society's Rod Hutchinson tribute weekend, and it created quite a good deal of interest. 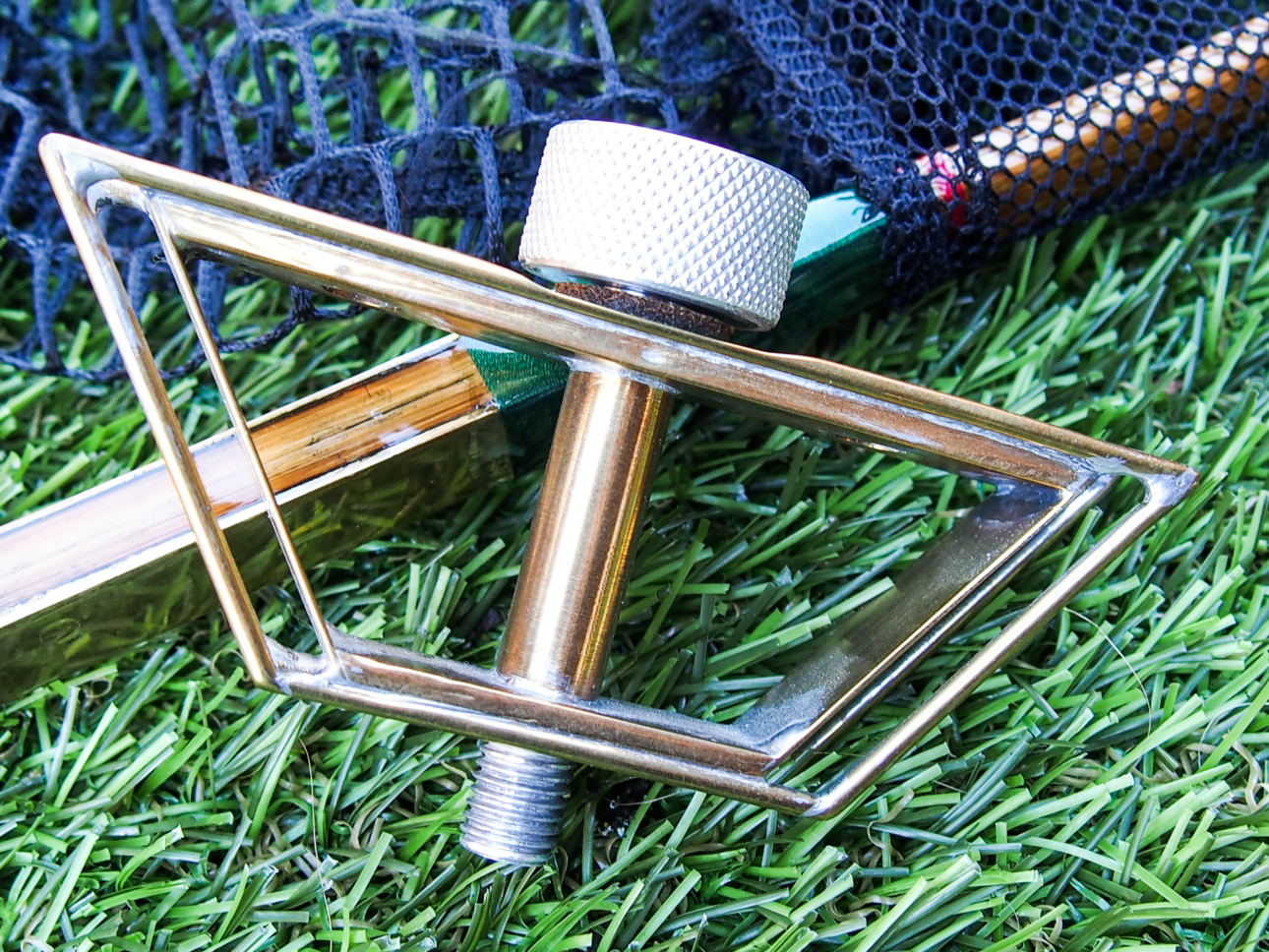 Above is the Opie net spreader & screw and below is Gerry Berth-Jones original landing net. I think everyone will agree that these two fabricated spreaders are so similar that it is almost a certainty that they were both made by the same hand. 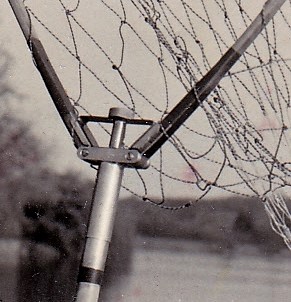 Gerry Berth-Jones’ original home-built cane landing net. As a matter of interest:
1. Gerry’s then wife, May (now Lang), hand-knitted the mesh.
2. Our President May Lang informs us that this landing net was, at Dick’s request when he first saw it, swapped for Dick’s own home-made landing net.

Below is a picture taken by son Tony on the first occasion that I used the ‘Opie’ landing net – the common weighing a modest 10lb 8oz. Of course, I'd have preferred it be bigger, and from Redmire but, very plainly, 'beggars can't be choosers', and circumstances dictated the venue if not the size of the first carp on this tackle combination.
Oh! also to be seen in this shot, is the large centrepin Dick Walker made for his friend ‘BB’ (Denys Watkins-Pitchford), circa 1949, and my own original B. James & Son, split-cane Dick Walker MkIV Carp rod. This most likely being the very first carp caught by anyone other than 'BB' using the Dick Walker made reel; and this carp being the first of five similar sized commons caught on the day. 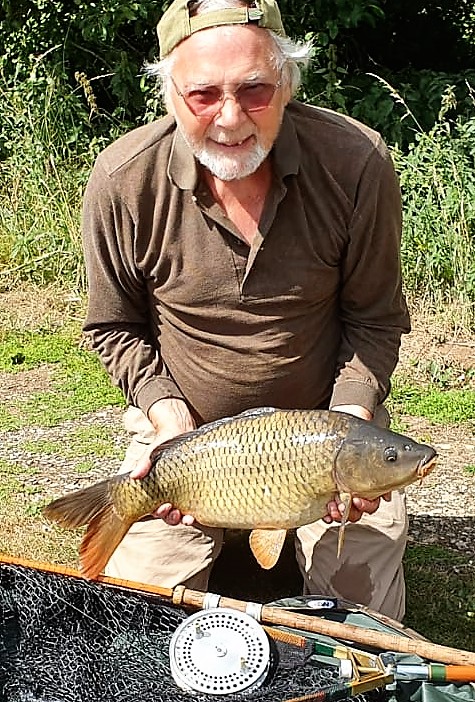 Second time out with the Opie net was to Michael Nadell’s idyllic, tranquil and beautiful lake.
Another traditional tackle day took me to Michael Nadell's beautiful and tranquil lake. Tackle chosen being 'BB's' Richard Walker made centrepin, Pete Frost's B.James & Son split-cane MkIV Carp rod, ( the Angling Times prize rod for one of Pete's 1960's Tiddenfoot whackers, all 31lb of it!) and the 'Opie' cane landing net. Early on I caught pike and tench, but nothing to get too excited about. Late afternoon, after changing to that most traditional of baits, floating crust, had no less than four chances: cleanly missing two, hooking and losing a good fish, before, on the very last cast, catching a very handsome mirror with coral-pink pectoral and ventral fins, weighing 24lb 4oz. And what a merry dance it led me, trying repeatedly to get into lilies and tearing up the lake as though its tail was alight, before finally rolling into the 'Opie' net, expertly handled by Michael. I'd forgotten just how hard some carp fight, and it fair wore poor old me right out!
Here's a picture of it. 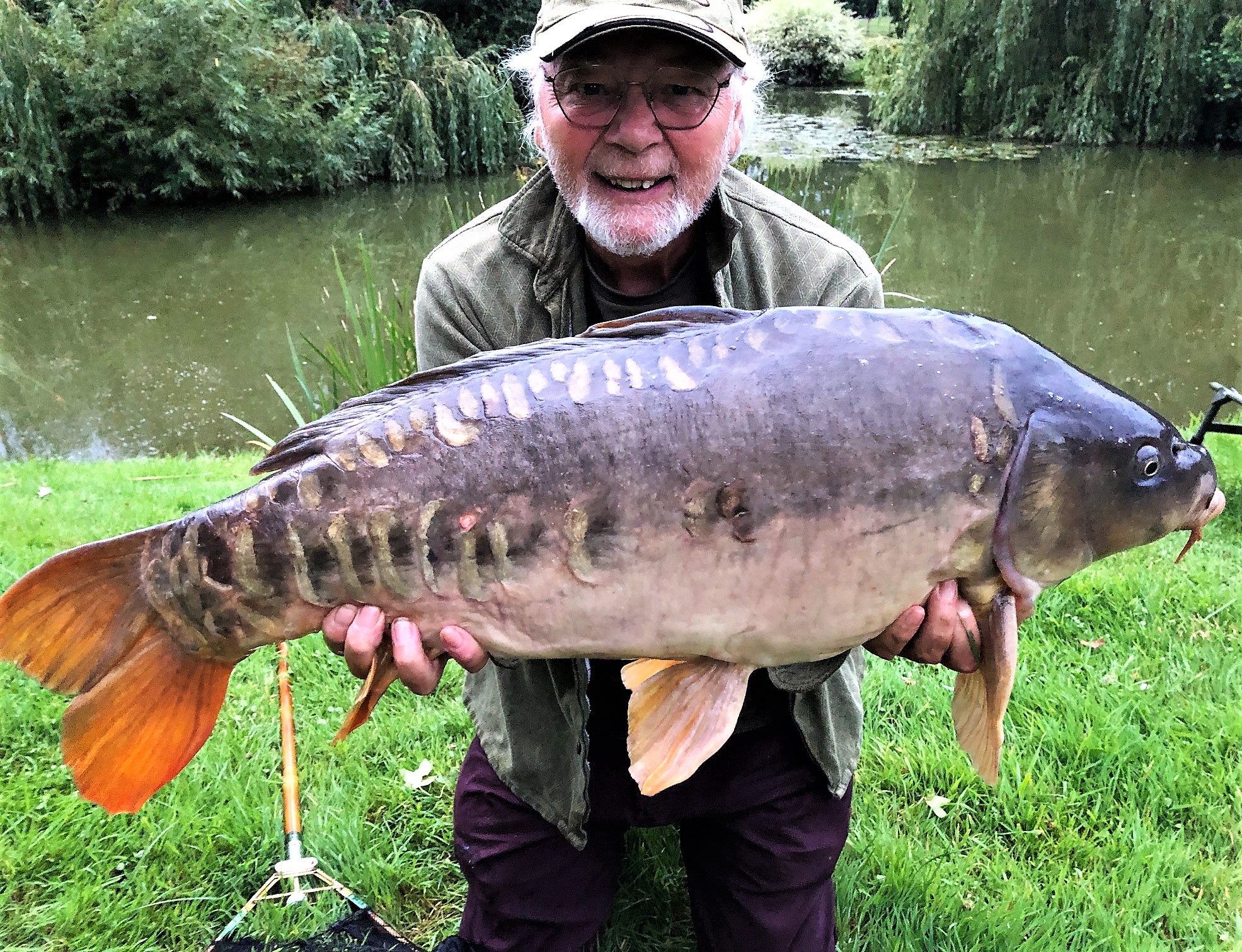 This beautiful 24lb 4oz mirror is the first twenty-pounder Len has landed in the ‘Opie’ net; caught on floating-crust from Michael Nadell’s idyllic lake.

There is more to tell regarding the capture of this beautiful and hard-fighting carp: As said, I WAS using the mentioned traditional tackle until losing a carp that patently illustrated I was seriously undergunned for carp of this stature, so, seeing no future in this approach, I intended to pack-up there and then. Michael, however, suggested that I try again using one of his already made-up outfits - modern rod, fixed-spool reel, together with 15lb bs mono. All I needed to do prior to casting was tie on a new and ready sharpened hook. And it was on this modern outfit that the 24-4 was successfully played and landed. 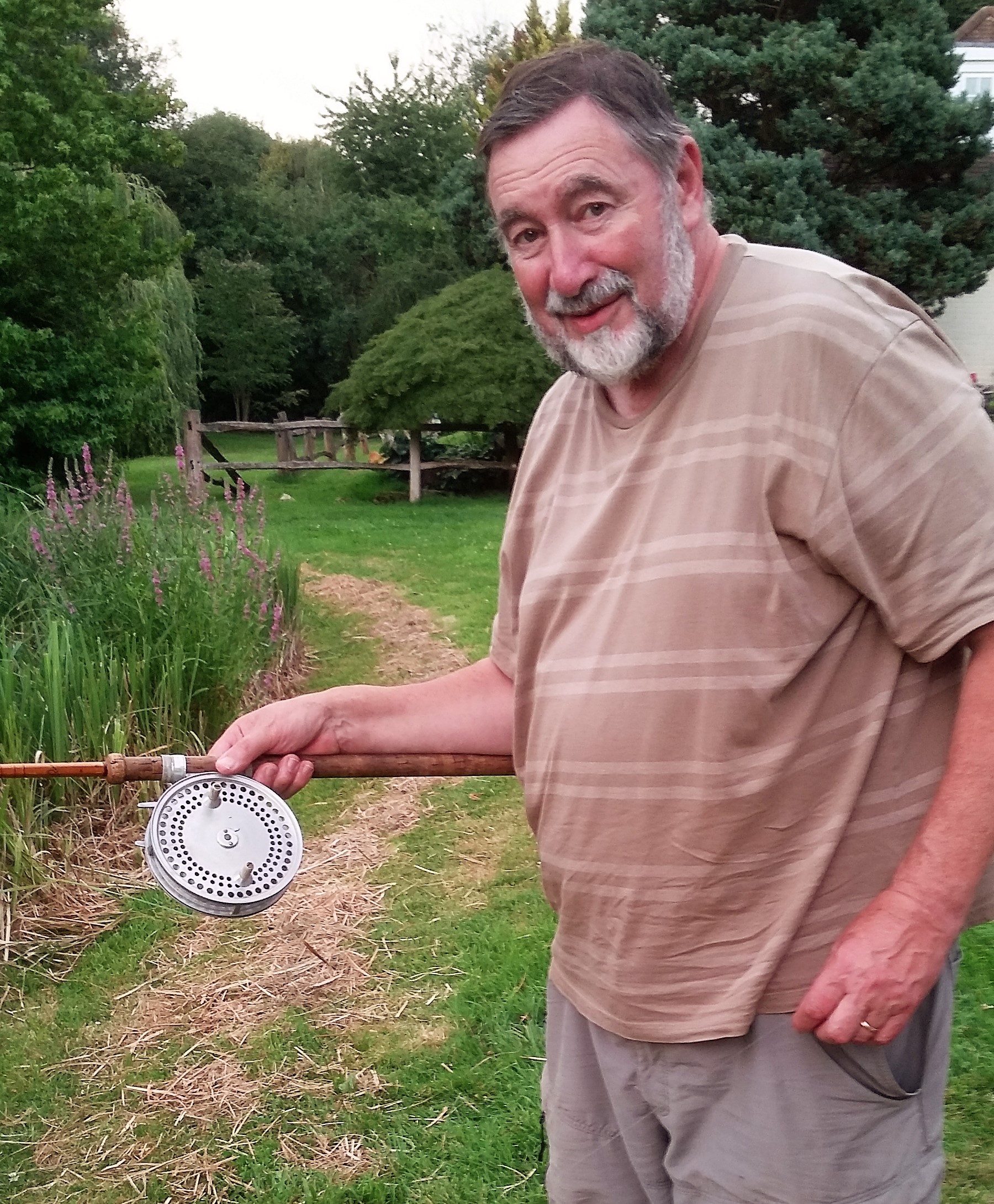 My good friend, Michael Nadell with my cane MkIV and ‘BB’s’ Dick Walker made large centrepin.

Thank you for sharing that with us Len, it sure is a lovely net.

A superb post and what a net - whatever the provenance.
The notes render a compelling match up.

Lovely net and story, and those cased fish are to die for.

I really enjoyed reading that, thank you for sharing Len.

The spreader block is a delightful example of elegant minimalist design, almost Art Deco like in its apparent simplicity and lines.
From "... the wilds of the Wirral, whose wayward people both God and good men have quite given up on ...".
Top

The 'Jack Opie' Net looks wonderful and the similarities are obvious, I would agree with Len's conclusions! With regard to the picture of the famous Dick Walker 'BB' reel, it would be great to see the only other known Dick Walker made reel, the 'Thorndyke' reel and Len's pictured together! I am sure that the owner, our own 'Fredline' would welcome the chance to compare the two side by side!

Lea Dweller wrote: ↑
Fri Aug 23, 2019 1:29 pm
The 'Jack Opie' Net looks wonderful and the similarities are obvious, I would agree with Len's conclusions! With regard to the picture of the famous Dick Walker 'BB' reel, it would be great to see the only other known Dick Walker made reel, the 'Thorndyke' reel and Len's pictured together! I am sure that the owner, our own 'Fredline' would welcome the chance to compare the two side by side! 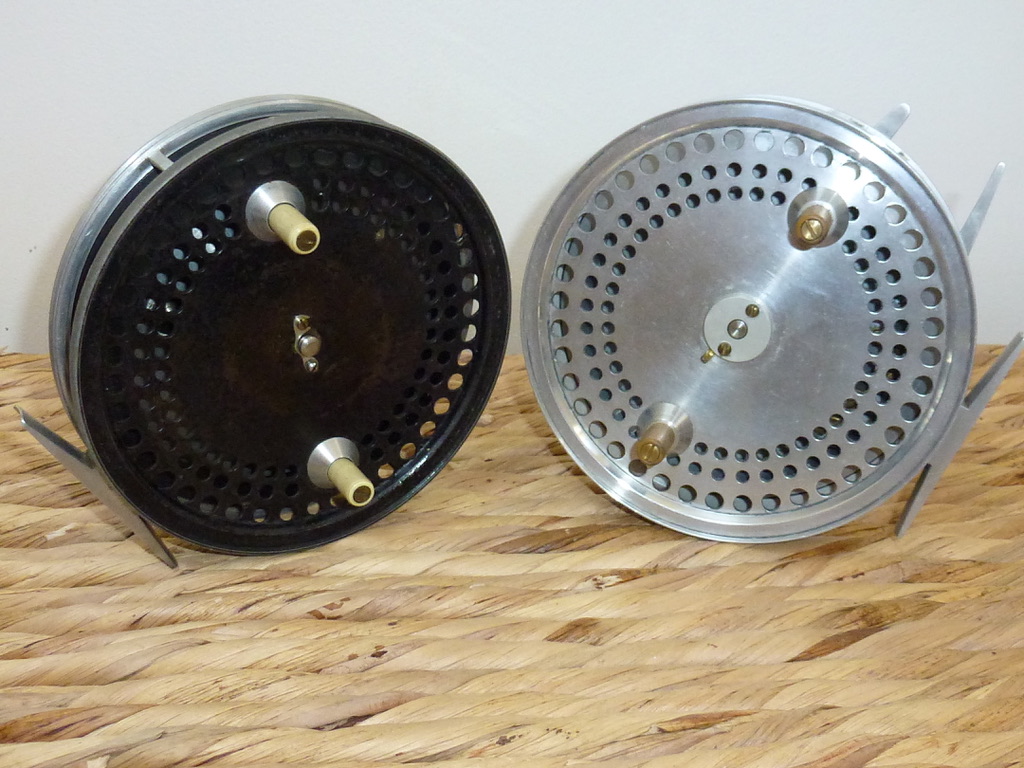 If you have no grease with you, and your rings are full of ice, do not cut out the ice with a pen-knife but get your man to put the rings one by one in his mouth, and so to thaw the ice.
John Bickerdyke.
Top

I have seen the 'BB' copy, but to be honest I was not impressed! Your reel is a piece of history, Len's likewise, a copy is not the same!
Our greatest glory is not in never falling, but in rising every time we fall!
Confucius
Top
Post Reply
9 posts • Page 1 of 1