Made some other form of traditional fishing tackle.
Post Reply
4 posts • Page 1 of 1

I was fishing the other day on the Ribble, and my swim was down a steep bank, with not a lot of room at the bottom without ending up "wet " myself.Whilst sat waiting for a bite, I was musing on how I would land any fish that should see fit to appear.
My net handle was six feet long, but because of the restricted size of the swim I would have a bit of trouble with the long net handle and the steep bank behind me, once any fish was in the net.
Anyway, I managed just about, but the problem niggled me , the real answer is a short telescopic net handle with a good extending length but with things being “traditional, that didn't really square with the need.
Once home I was musing , and decided to dispense with the telescopic idea and make a quick release net head fitting, reasoning that once a fish had been successfully netted then it could easily be weighed in the net head and released without actually being handled too much at all, which was a bonus, plus only handling the net head and not the pole in a restricted area seemed just what I needed. I am certain that this idea has been used many times by commercial tackle companies, but my idea was to make a fitting that would sit on a bamboo handle.

Anyway, once in the workshop and after a bit of bodging and tinkering I came up with this, it is polished alloy as opposed to brass, as such it matches my landing neat spreader , not sure it looks right on the flamed handle , but as it was the one I use on the steep banks it , well, had to be the one used. I will probably make another with a plain bamboo handle sometime in the future. 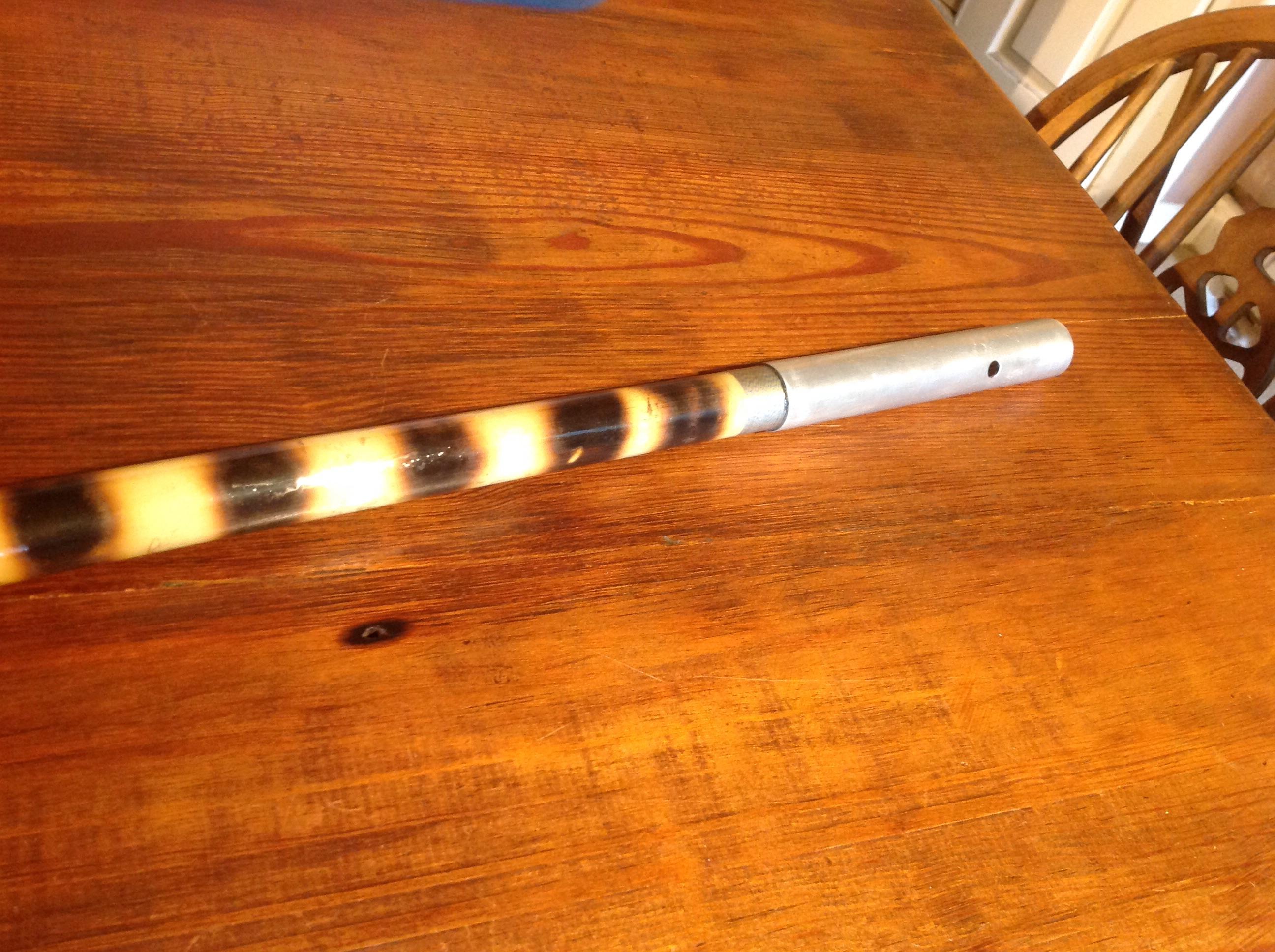 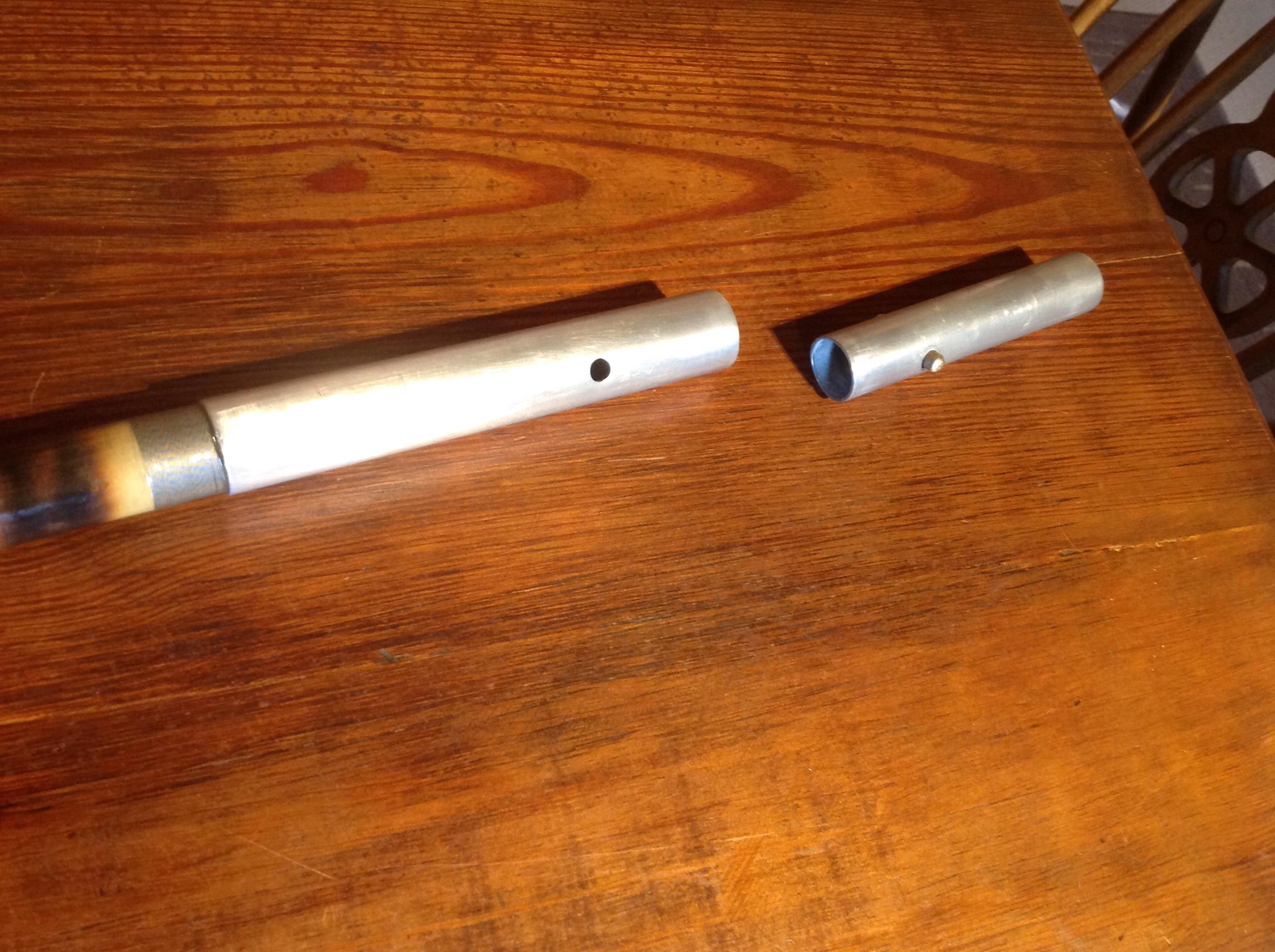 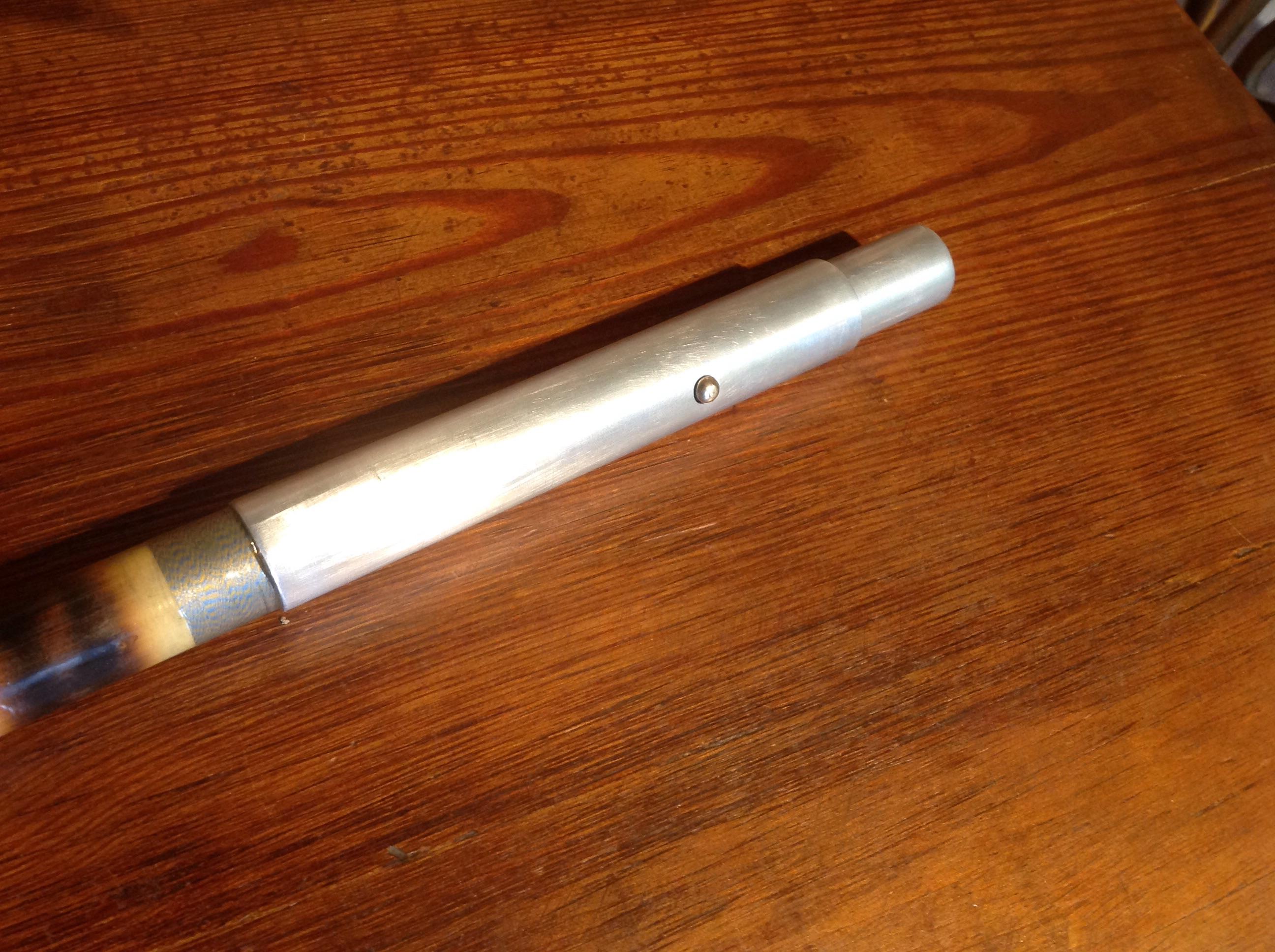 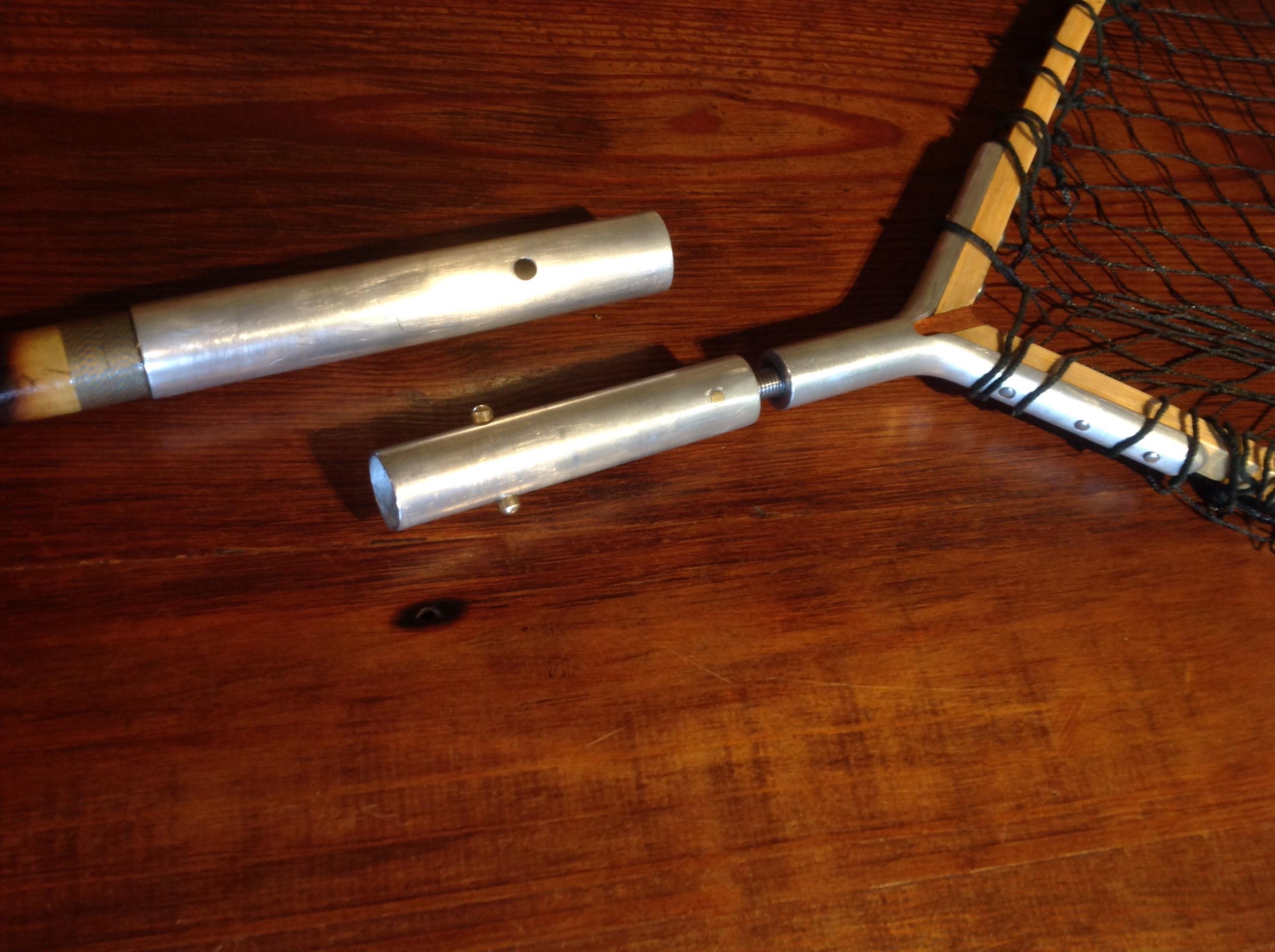 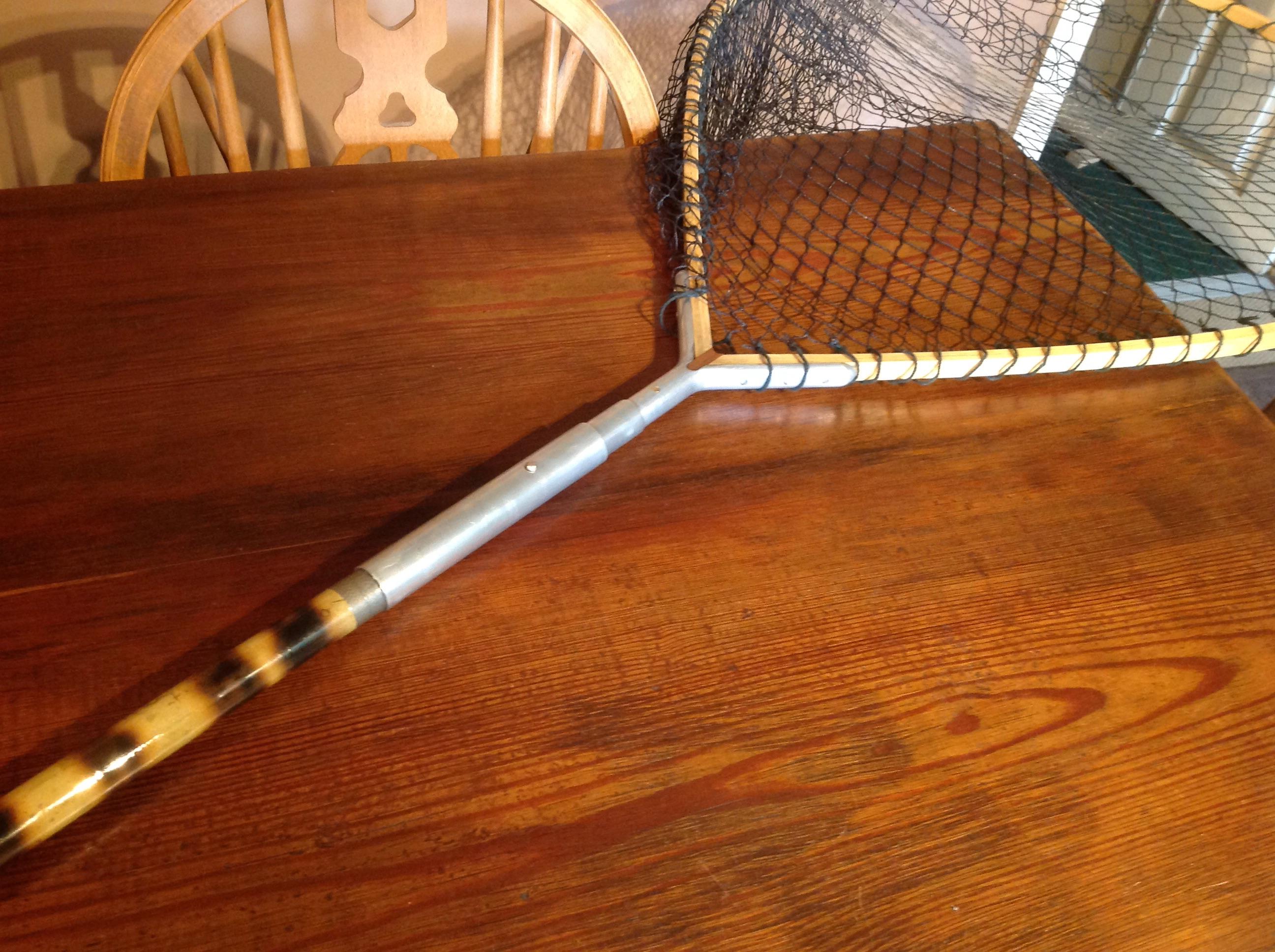 The pictures are I think self explanatory, its just a button spring fitting quick release inside a tube, similar to those on an NHS type Crutch, the buttons springs can be purchased from any camping shop as can the alloy tubing.It seems quite strong enough for its purpose, and quickly clips off as opposed to messing about unscrewing the net,I just need to test it out now.... probably on the Wye in a couple of weeks unless I can fit a quick trip to the Ribble in before then.


Thinking about it, this may just work as a joint for a two part net handle , thats something else to be thinking about in the future..

Thank you for looking !

That is a lovely elegant solution to what I have always seen as a problem with landing nets when fishing alone. Handling for weighing or a photo is a lot easier of you can free the net from the handle and then re-fit it quickly and easily.

I use the Korum screw in quick release fittings but they do look out of place on a cane landing net handle.
From "... the wilds of the Wirral, whose wayward people both God and good men have quite given up on ...".
Top

Seriously now - it’s very clever and could help many of us irrespective of type of swim - the idea of minimal fish handling and then weighing seamlessly is brilliant.

Return to “Making Other Items of Traditional Fishing Tackle”

Users browsing this forum: No registered users and 3 guests