York tackle shops in the 1960s

Do you know of a good traditional fishing tackle shop, past and present.
Post Reply
9 posts • Page 1 of 1

York tackle shops in the 1960s

Growing up in York as an aspiring angler I remember a number of tackle shops. Hookes of York on Coppergate was probably the most aspirational and catered for game anglers. Generally you were served here by a man called Chris, always well dressed with a collar and tie. Then there was Mick Bulmers on Lord Mayors walk; this was a junk shop cum fishing shop. I think a lot of the merchandise in the windows may have been ill-gotten, but of course I have no evidence for this. I bought an Edgar Sealy Octofloat from this establishment which is currently - 50 years on - being refurbished by a friend. George Hills was on Gillygate; a quietly spoken but very nice chap. He sold tropical fish too which was another attraction to a young lad, and best of all would undertake rod repairs quite reasonably. Very handy in the days when you lashed your rod to the crossbar of your bike and then tried to race your mate to get to the best swim. There were thrills and spills a-plenty. Then there was Holgate Commission Sales on Holgate Road next to Alan Mountain's Honda motorcycle shop. HCS sold second hand tackle and always had a familiar, odd, but not unpleasant smell. I wonder if olfactory descriptive notes could be attributed to old tackle shops in the way tasting notes are provided to high end single malt whiskies? Here you were usually served by (to my eyes then)an elderly chain-smoking lady with thick lenses in her glasses and painted nails. She dispensed maggots from a galvanised dustbin with well practised aplomb, and used to give you a double portion if they were starting to turn. Anyone else visited these establishments back in the day?
Top

Bulmers was the place for me. Guns, tackle, militaria, musical instruments and always great banter.
I still have odds and ends I bought there.

Being born and bred in York for 18 years those names bring back some memories, but from the seventies. I well remember buying my first sweetcorn from the shop in Coppergate, it was in a small plastic tub and preserved in formaldehyde, at least that's how it smelt, and it was useless. Bulmers was really just a junk shop, but I remember dad buying hooks there occasionally. I think Bulmers might still be going, at least they were a few years ago, but were only selling odd bits of second hand tackle and mainly CDs etc. Another shop, not mentioned, was AA Tackle in Acomb, but they started in the seventies, and that's where I mainly bought my tackle and maggots.

You didn't mention venues! I mainly fished three local ponds, Oggies, Chappies, and the Railway Pond. All very good if you new where to fish. I also fished the Ouse at Poppleton occasionally, and near the bridge at Clifton, which was great for trotting.

Did you know any of the local characters?
"....he felt the gentle touch on the line and he was happy"

I got a motorbike in 1970 so I could get out of York. I liked to fish the Rye and the Seven and Barton Hill Beck, the Derwent at Stamford Bridge, and Claxton Brick Ponds and Sand Hutton Gravel pits on the York Amalagamation of Anglers ticket. I lived in Acomb and fished the Ouse at Poppleton, Red House, and the city sections. Kings Staith and the bottom of Marygate were always good for roach on bread or wheat. Sometimes I fished Potteries Pond in Strensall for tench - it was free then, but you had to write to a firm of slicitors for permission. I have a friend, Paul Coxon who I think still bailiffs the Railway Pond. I did a lot of fishing with Graham Booth who became an officer in the Royal Artillery. He is an excellent pike fisherman and settled in Norfolk for the pike fishing and then retired in France. He wrote the History of Pike fishing - parts 1 and 2 and used to give talks to the PAC. I also fished with Dave Southwell who was then an undergraduate at York University. He became a teacher and latterly guided fly fishing on the Driffield Beck. They used to net grayling from the Driffield Beck and put them in the adjacent canal. I managed to catch my first trout and grayling from the Driffield canal on very crude fly gear from the canal in the early 70s. I also met Kevin Roberts a few times whilst fishing - he used to write an angling column in the Yorkshire Evening Press around this time.
Top

I fished the pond at Sand Hutton a few times with my dad, it was full of tench. My dad fished with a chap called Les that lived in Acomb, and he's was great to watch and would catch fish after fish. My dad also fished with Oggie, the bailiffe at Oggies pond. And we knew a chap called Eddie Gowland who was the greatest angler that I know from York, in the sixties he caught a 6lb plus brown trout from the Ouse in York, and he had it stuffed in his living room (he told me that it was the Ouse record). He also had an article written in one of the angling mags, about him catching a 9lb leather carp on 2lb line, size18 hook, from Oggies pond whilst roach fishing, that was probably in the mid seventies.

The Railway pond is very different now to when I fished it. In the early seventies it only contained sticklebacks and toads, and lots of newts. I caught my first fish there, a stickleback with a worm tied to cotton. Mid seventies they stocked it with carp and tench and big chub from the Ouse, then in the late eighties they drained it by over a metre to build houses right next to it, and ruined a great wild life sanctuary. I went back there a few years ago with my son and it was very different, much smaller and surrounded by houses. There used to be a large shallow pond by the side of the deep pond, and this contained hundreds of newts. All gone! I think the toads have also gone, in the seventies there were literally thousands of them, and in spring I would catch them by the bucket before letting them go, and in August the banks were covered with thousands of tiny baby toads. And now there's houses and a small but deep pond. I spent hours of my childhood there, watching nature, before I ever cast a line. Great memories!
"....he felt the gentle touch on the line and he was happy"

I knew Eddie Gowland. He sold my first ever fixed spool reel to my Mum - this was then given as a birthday present for me. I must have been about 11 or 12. The big trout came from Leeman Road. I think it was 7 lb 6 oz; it was listed in the record list in the York AA membership book. There were later unkind rumours he caught it on livebait out of season but I don't know if that was true or not!
Top

He was my next door neighbour and knew him very well. I very much doubt he caught the big trout using a livebait. I watched him fish many times and to my recollection he only ever float fished. Unfortunately, he had mental health issues and stopped fishing in the mid seventies after a nervous breakdown. Before that fishing was his obsession. He was a really nice chap. His son was a good friend and I saw the cased trout many times, it was quite a specimen.
"....he felt the gentle touch on the line and he was happy"

Sorry to hear Eddie had a nervous breakdown stopped fishing. Like you say he was pasionate about it, had great watercraft, and very skilled at float fishing. Also he had the time and patience to offer advice to young anglers (like I was): the man, the myth, the legend.....
Top 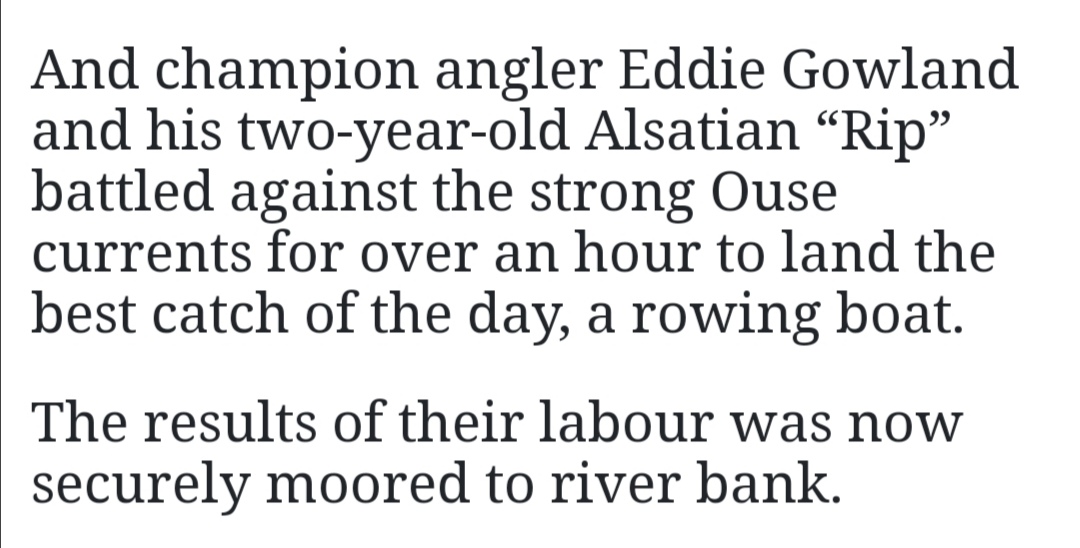 Found this on't Internet. Fifty years ago in the York Evening Press (2017) so that would be in 1967. I forgot about his dog Rip, it was much older when I knew him. I don't know the story behind him hooking a rowing boat but it must have been interesting or a slow news day to get into the Press. His dog was also quite character and had a great temprement.
"....he felt the gentle touch on the line and he was happy"