As you may know I have been keeping myself busy making the odd landing net, I have, up to the recent auction, I had made two sizes, Large, for big fish, and Small, for little ones .

Over the last couple of weeks I have finally got around to constructing a former to make a medium sized net, so I suppose that I could say I now have the full set .The weather has been so inclement that I was getting stir crazy , and I decided that I needed to keep busy . I not only needed the former for the small and medium nets , but also a steamer and a steam box for the ash frame laths. I read several posts on here, and somewhere read that a length of steel tubing had been used as a steamer container, so one was purloined, and made an excellent container for the wood to be soaked and steamed in, the whole issue is a bit “Heath Robinson” but seems to work well enough, the steam comes from a converted steam paint stripper. As in a fomer life I was a joiner, I had a good selection of tools that have come in very handy, the one thing I dont have is a lathe, so I have to rely on a friend for some centre /drill work on the alloy spreaders 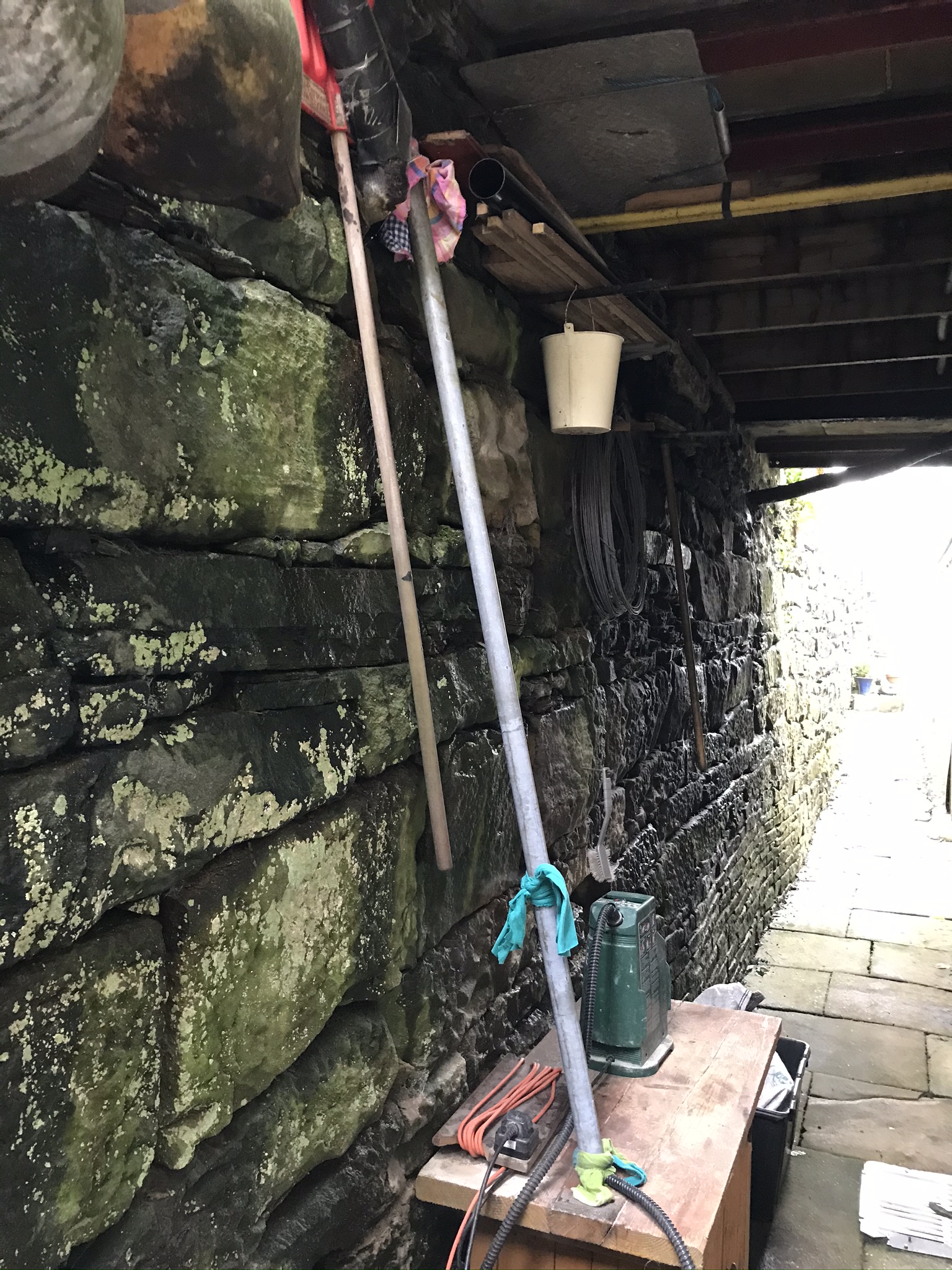 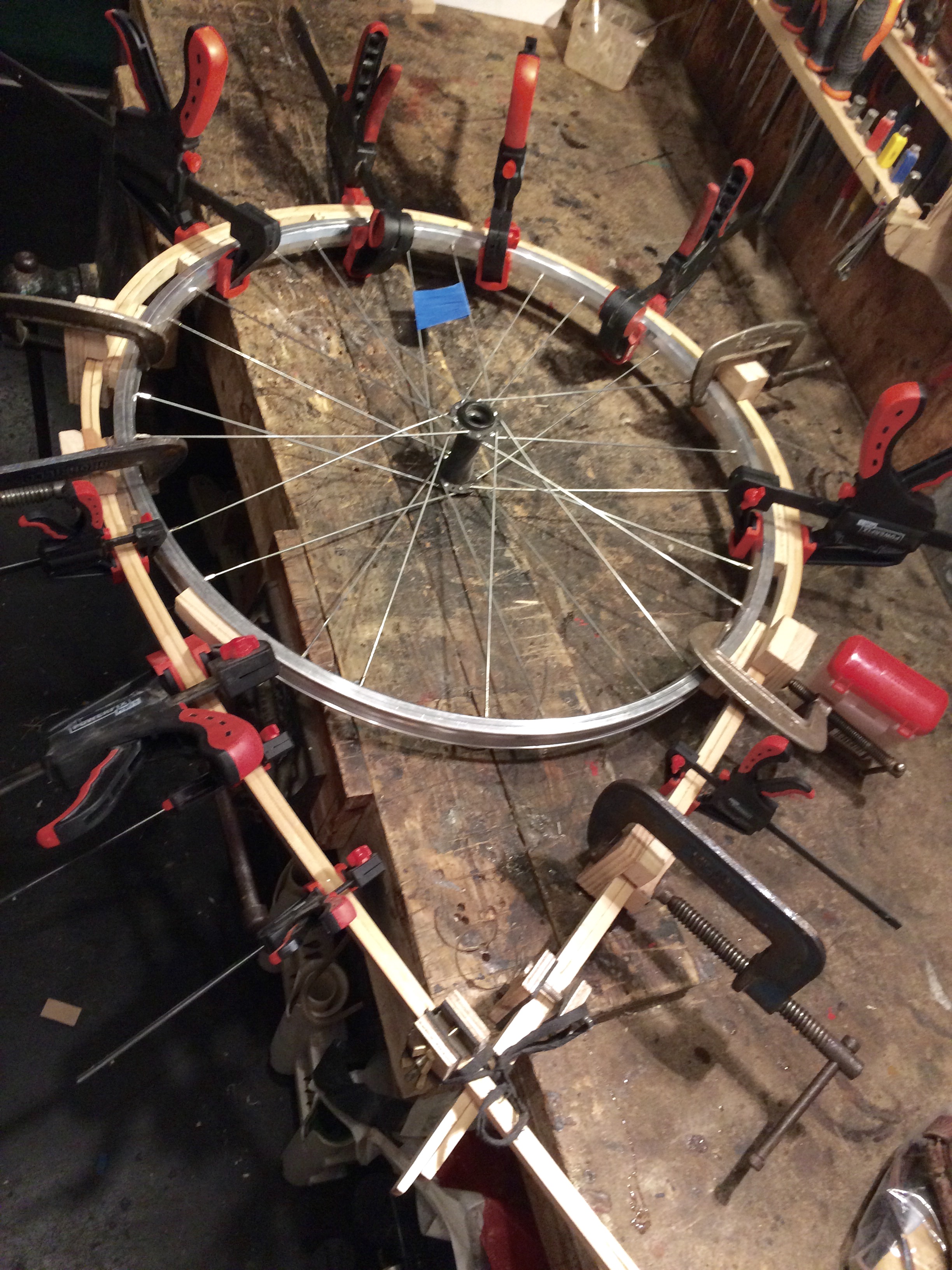 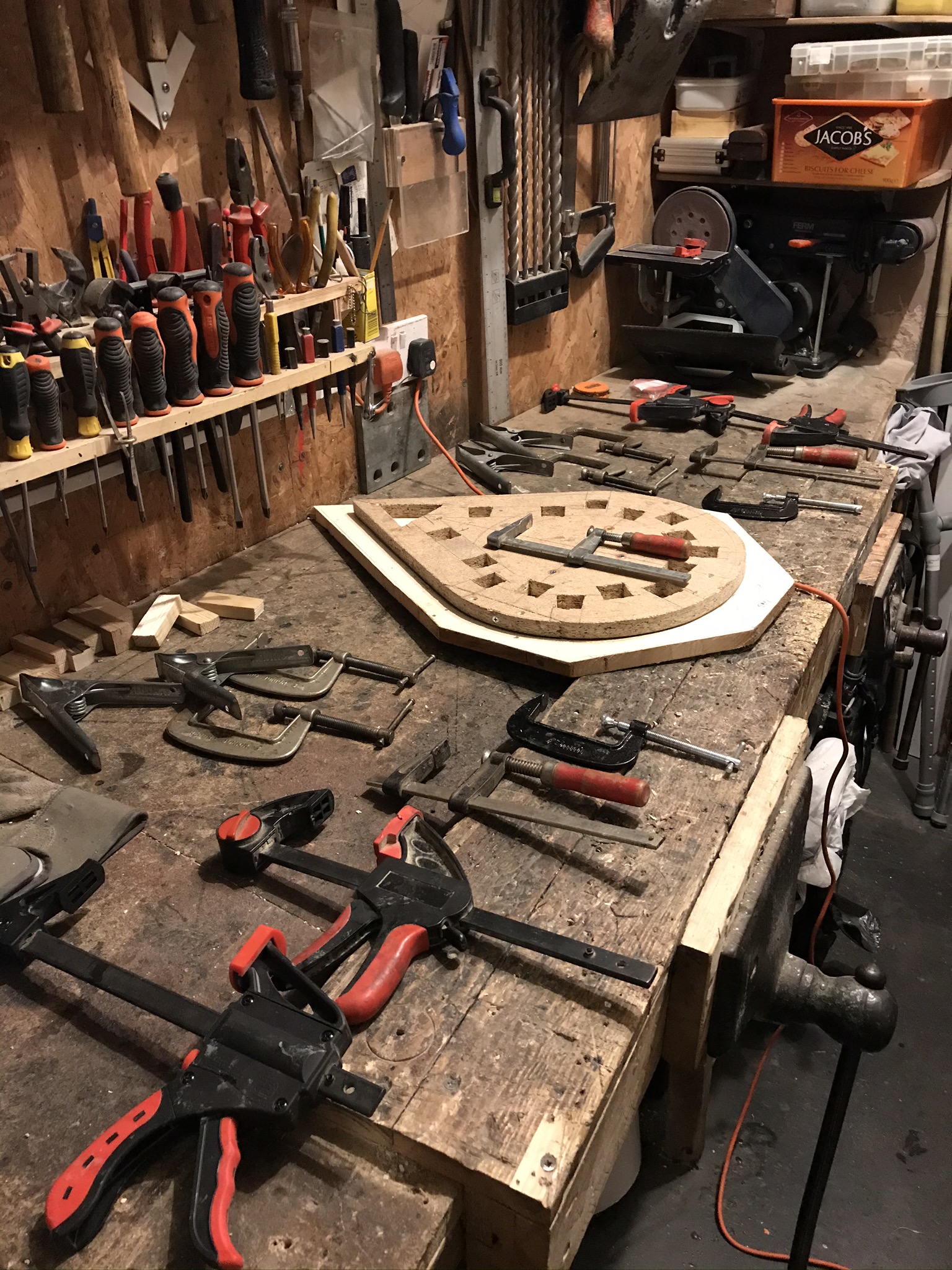 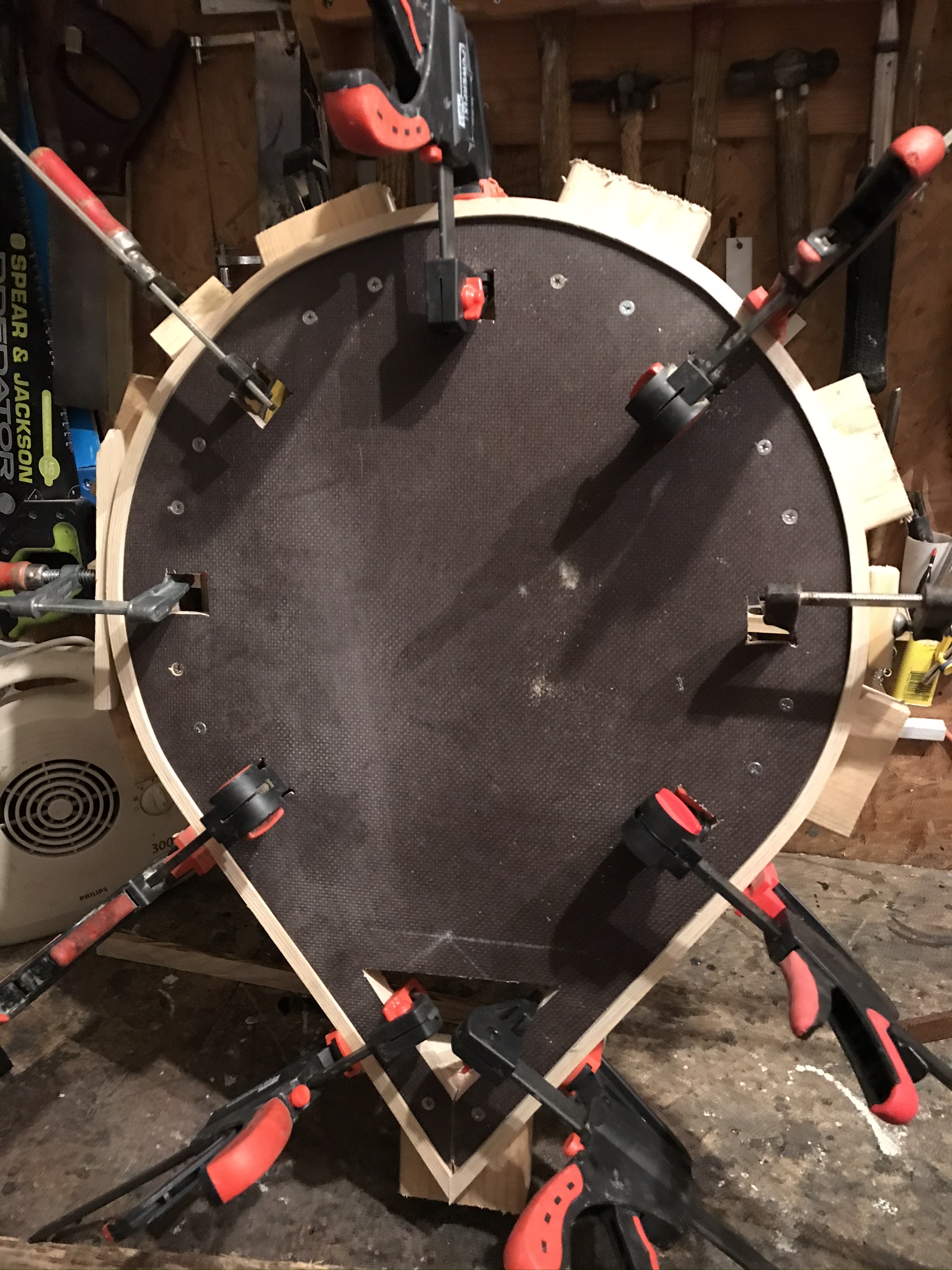 I have managed to construct the net frames around the sizes that the knotless Snowbee replacement nets come in, this is not an easy task as the replacement nets themselves do not seem to all conform to the same sizes, one will be a good fit, one will be a snug fit , or another may be on the large side, however, I seem to have managed to get them all eventually to look ok, in addition to this, there is also a supplier on a certain auction site that sells nets that fall between the small and medium Snowbee sizes , having now amassed a bit of experience of the quality of the nets, I would say that the odd man out in the above are the auction site nets, whilst quite capable , they do not, in my opinion match up to the quality of the Snowbee nets .
I have no knowledge of the Snowbee rubberised nets .
When I first started , I measured the frames, and then took a drive to Leeds to visit a large tackle shop, where I searched through all the landing nets on display until I found one that fitted my frame, I quickly discovered that this was not the way to do things as almost all the nets were not suitable , most being constructed of modern mesh which just did not look right , thats when I went over to the Snowbee nets, seeing as they are , so far as I know, the only supplier of traditional net mesh bags. I have contacted other manufacturers and suppliers , with a view to accessing suitable knotless mesh, but had no luck.

Below are a few photos of the three net sizes, you will see on the smallest net there is again a different net mesh, actually it is a Korum net that I had for some time, and luckily it fits the smallest frame quite well. Two of the other smaller nets that are now with their new owners have Snowbee netting, and I would describe them as more of a silver fish net size if anything . 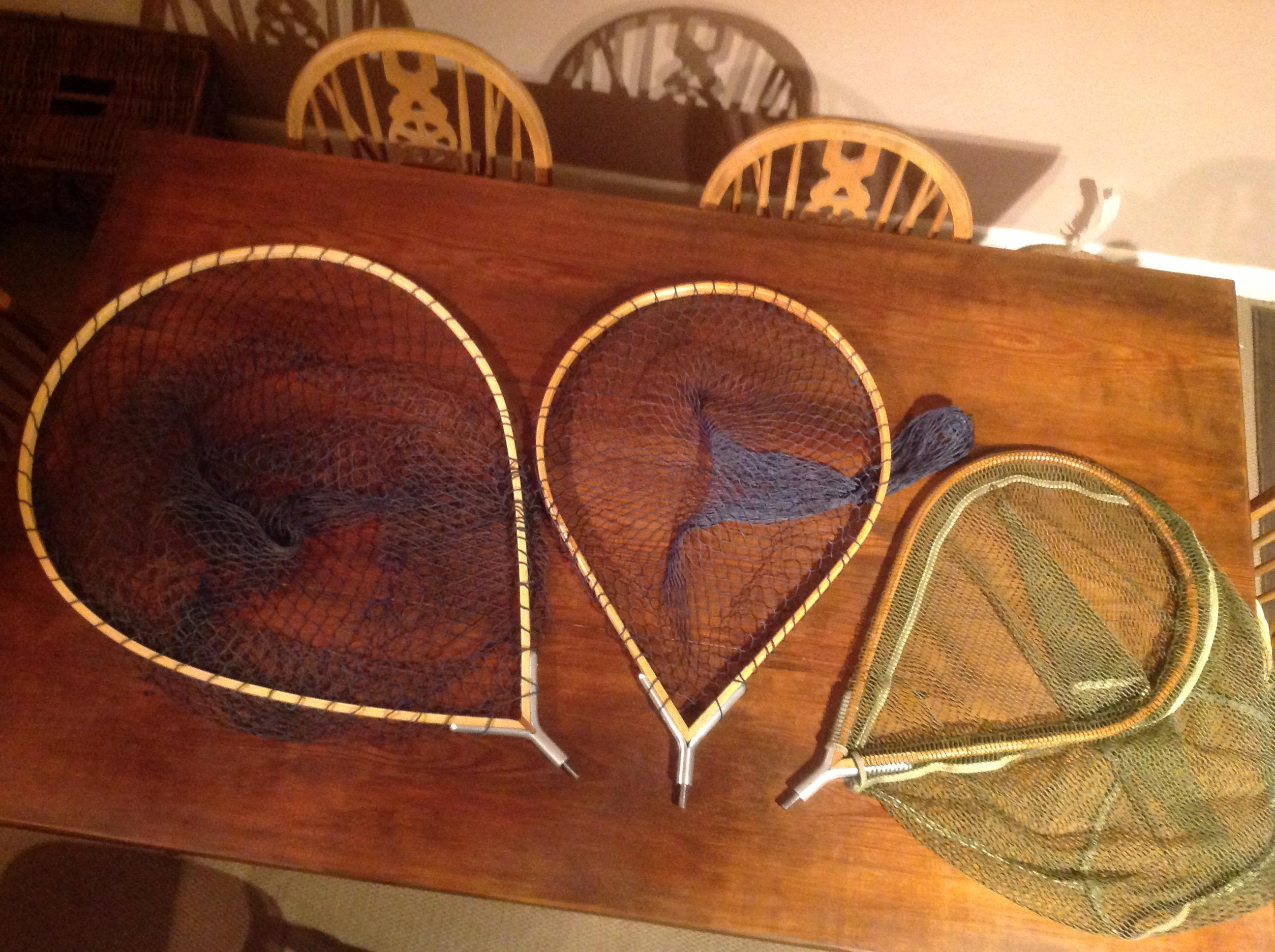 Here is the latest medium sized net, again it is made from Steamed Ash, and constructed on a former. The frame has been stained and had several coats of Danish Oil, I think I may strip it down and give it several more coats before it gets used. 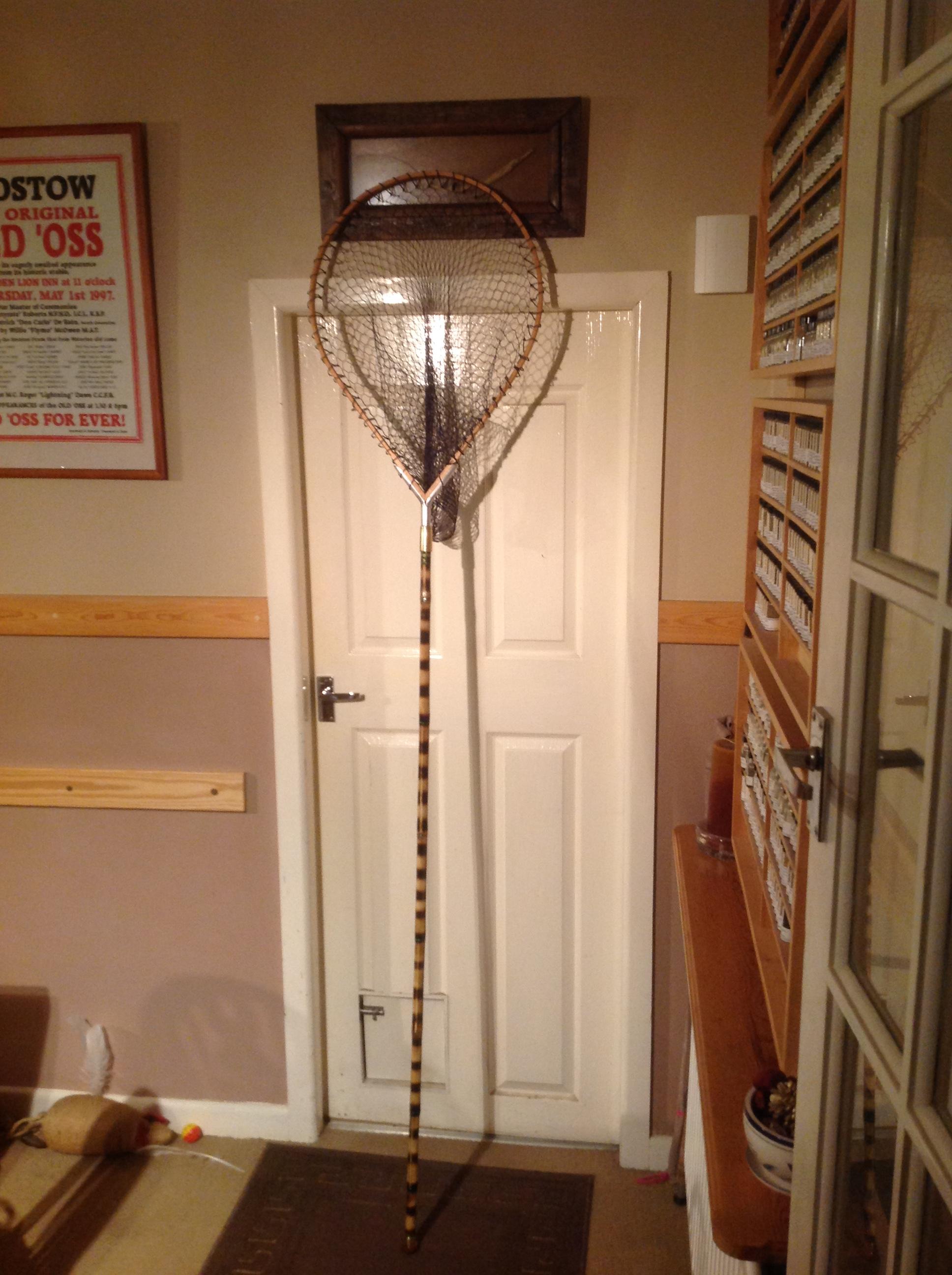 All the frames are constructed so that should the net become damaged it can be replaced with the minimum amount of work, simply unscrew the “Y” spreader , replace the net and screw it together again.


All the above are made as a hobby, as I said earlier, over the last year or so , I have constructed several traditional style landing nets. If anybody is thinking of having a go at making themselves a net, then please feel free to contact me , I may be able to help out a bit if you have any questions or problems regarding the net sizes etc.

I should add, that if it has not been for our esteemed friend Pallenpool, ( Peter ) then I probably would not have even attempted to put any traditional net together , he is a real source of encouragement , when things are not going to plan he always has a good word, and in a nutshell he was the inspiration for me to start bumbling around in my little workshop on these bits and bobs.

In addition to Peter, another forum colleague Bobthe float ( Terry ) made an enquiry about the smallest size net , I had no idea how to make one from steamed ash, but again, Terry was very patient, and provided the sizing he was looking for. After a false start or two and a lot of forum searching on here ,I managed to construct a net that he seems very happy with.... If it had not been for Terry I would not have even attempted to make a smaller net for myself.

Finally, I would like to say thank you to everybody that showed an interest in the recent auction, I felt it was the least I could do to show a bit of appreciation for Mark, and all the hard work that has been put in to making the TFF forum the place that it is, since my first joining it has been a great source of knowledge gained by like minded anglers , all who are approachable and very willing to pass on information on almost any aspect of traditional fishing rods, reels, indeed anything to do with our interest .

Hurrumph....... whatever happened to Handlines ?
Top

I can vouch for the quality of these nets, having been lucky enough to win the recent auction in support of this great forum. Frankly, I think I got a real bargain !!! David, Sir ... once again thank you.

"Beside the water I discovered (or maybe rediscovered) the quiet. The sort of quiet that allows one to be woven into the tapestry of nature instead of merely standing next to it." Estaban.

Me and Lily love our nets David having a large and small one each. It almost seems ridiculous not to have the full range there may be an order for two medium nets next summer

Lovely to see how they are made, great post.
Mark (Administrator)

Well done on all accounts David, keep up the great work..

David's nets are a thing of traditional beauty, I can feel the desire building for a large net to keep my small net company....

Thanks
BB
'We fish a lot' Forrest Gump.
Top

Thank you everybody for your replies...

I am slowly getting to grips with things, and now will probably be experimenting with " sewn in" nets next year, but that is a long way away just yet, I have been asked re the possibility of constructing one,so its on my " to do " list, I have a couple of rod rebuilds to be getting on with as well, so plenty to be getting on with