Since completing the net for auction, I had a bit of time on the horizon, so decided to set myself a challenge... a certain member on here who shall be nameless to save his blushes, has been asking if I was able to construct a net with "sewn in " netting as opposed to my usual and easily replaced loop fastened net.It was a challenge as opposed to a request , so I decided nothing ventured nothing gained....

After scouring the posts on here, and making a few of my own ideas fit, I started on the first of the two sizes, small amd medium.

I very rareley make any design drawings, and proceed forward using "The rack o th"eye " as we say here, basically bodging along and hoping that things turn out, this time had to be a bit different , and accordingly I took pen to paper, and after counting how many loops there were on the nets, I had to make the number of loops fit the circumference of the net, now to anybody with half a brain this would probably be easy, but I am hopless at maths of any kind, and after a lot of false starts I started to mark up a frame , why , I dont know , but I always ended up with either too many or too few hole marks, this, plus accounting for what had to be done to the frame around the spreaders gave me a couple of headaches . eventually I decided to mark up the frames from the centre top, and work down each side until I ended up at the spreader , and leave a few inches either side ro account for however many loops I had left.
It sounds like a recipe for disaster, but after a few goes, it ended up just about right.
So, the frames whilst still straight were marked up, a groove was cut out along one side on my spindle moulder to accomodate the stringing cord, the problematical holes were drilled and then the frames were steamed and clamped in the formers, when they were dry, the spreaders were fitted, these had been constructed in the days waiting for the frames to dry..

Everything so far seemed to fit, so the next job was to round over the frame edges , which was done using the router, which now left the frames to be sanded, stained and oiled.

The frame finishing took about ten days, allowing for the Danish Oil to penetrate and take on a decent resistant finish , then came the task of stringing the nets to the frames.... I used a heavy Dacron Shark line to string the frames, one left self colour and the other dyed .

It took a while, but here are the results.. 2 nets, small and medium, I think they are passable, but I dont think I will be making any more, the work involved caused me much brain melt, and apparently my good lady was beginning to worry for my sanity, judging by what words and phrases she says she heard coming from the workshop. 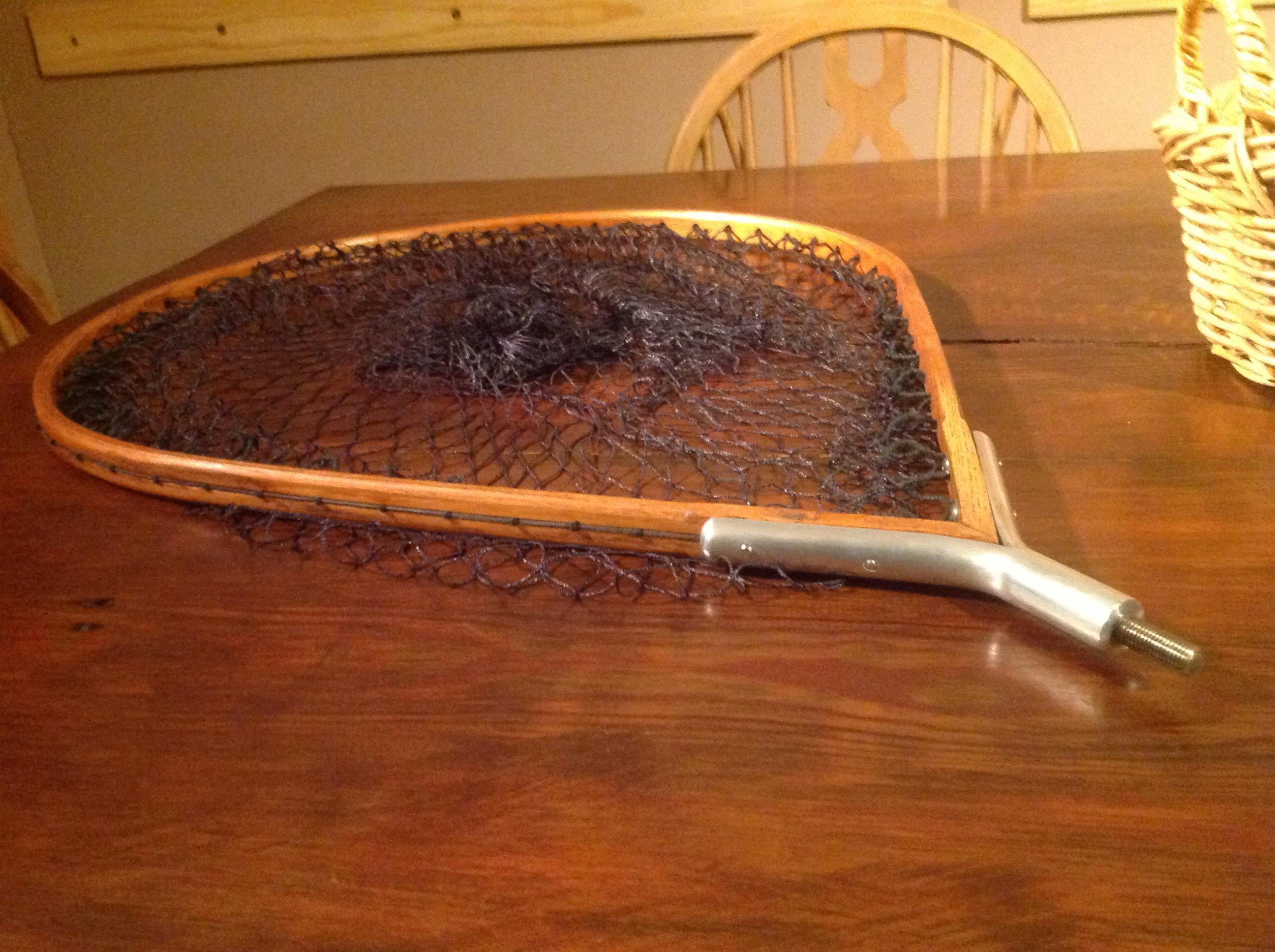 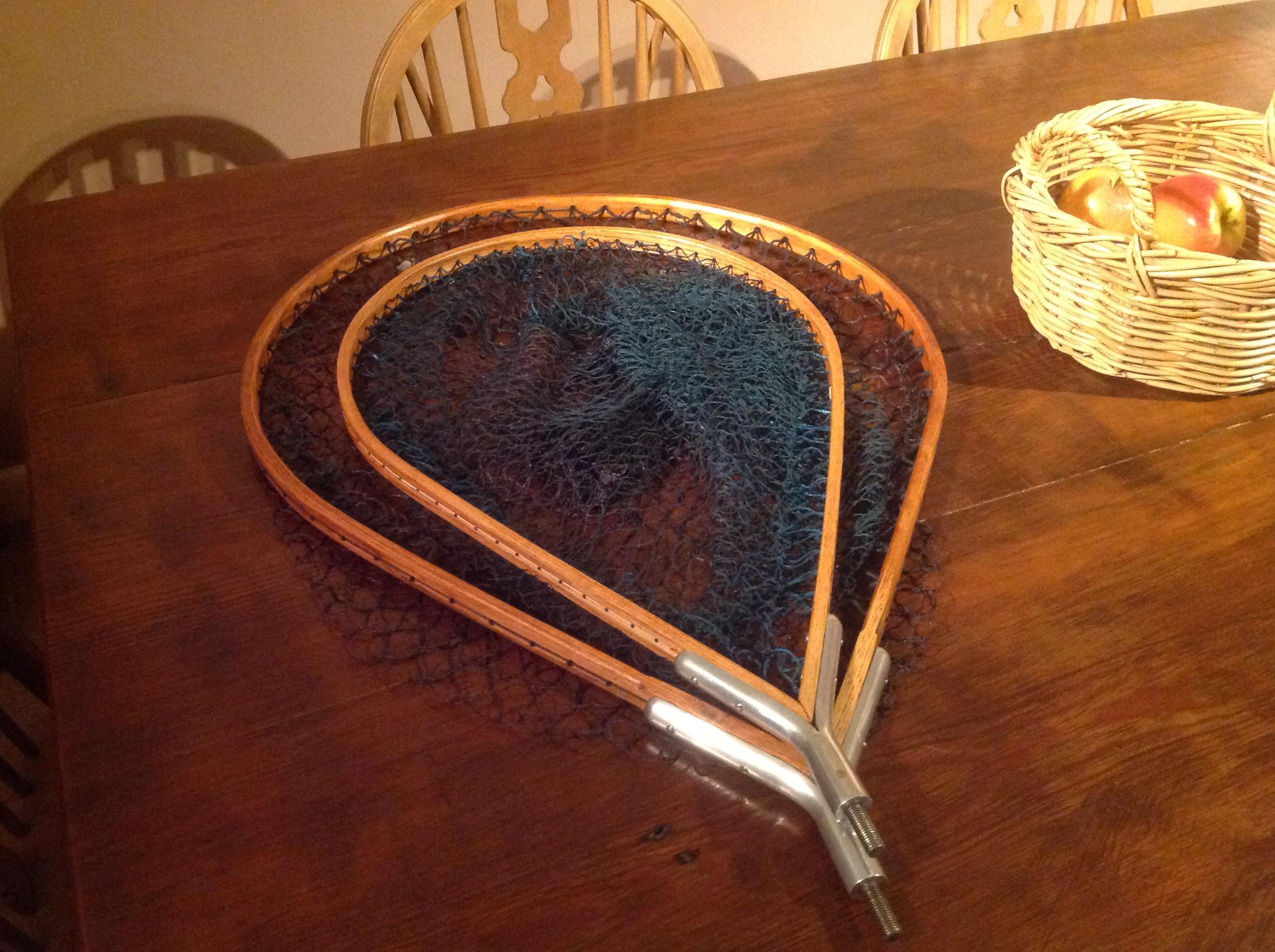 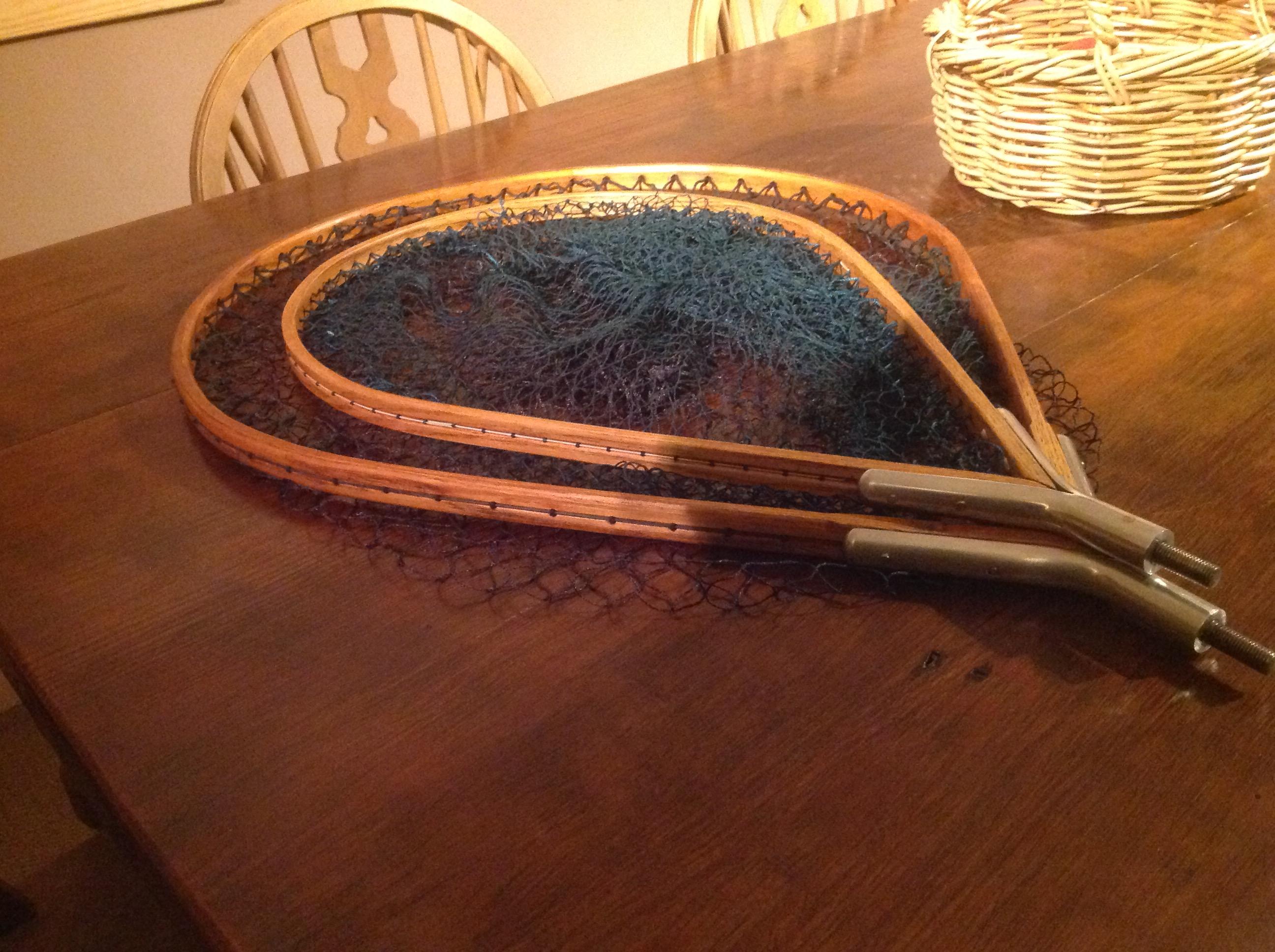 Now I have to think about a couple of poles to match.... although that can wait until after Christmas, I also have a couple of net orders to complete before February, so they will need to be sorted first.


Anyway, I can now say to all " Seasons greetings " may your lines always be tight, and your days be filled with piscatorial satisfication. I am off for a glass of Malt and to settle in front of the fire.

Time well spent I would say. Those are fabulous well done

Really impressed with those David; really really nice. I think you have "nailed it" with those.
Top

Absolutely stunning. It is a great gift to be able to create work like this. I am very envious. I just collect litter on the river !!
Trouble is, the fish just don't read the books......
John Harding
Top

Excellent. Where did you obtain your nets? I've used the Sharpes Aberdeen nets in the past, but they're rather frail looking, and the mesh too open a gauge. I'd prefer something a bit meatier. And may I ask how much you paid for them? Thanks.

Will.
What Great Ones do, the Less will prattle on. Wm. Shakespeare. Twelfth Night.
Top

The nets are all Snowbee replacement nets sourced from the internet, they come in at various prices for different sizes,and different suppliers, so its best to know what size you need . I would say about £15.00 per net on average, going up from cheaper at the smallest to most expensive at the largest.


David I missed this post have these nets been put in the accumulation store - until Spring? I take it these are some of the first to receive the sewn in net. They look very good indeed.

, No, there is a large one somewhere in the house for a friend of mine, (the Danish Oil is getting a rather nice patina to it )
The other two are my own, nobody else has expressed an interest , and tbh they do take a bit of messing around with to get the stitching right. The accumulation store has a few looped net frames , but no more stitched ones .

TBH I think the beggars are breeding

Thanks for that David - I am sure the breeding program will have huge consequences to space in the workroom - it is good reasoning to have a few knocking around however.