Just built or restored a cane rod or need some advise then let us know in here.
Post Reply
7 posts • Page 1 of 1

...there will be others of interest.
But, please can anybody clear up: are the names Brand names or material types....or what?

Chapman always refer to Aqualite, others refer to Amberfin and so on. Just a thing that has bugged me for a long while.
Mike
Top

I have browsed through some old tackle catalogues and I think Aqualite, Amberfine, Agatine are just different names for similar or identical things.
One is referring to Aqualite as “hard and durable with a highly polished, frictionless surface. Impervious to corrosion. Sherry colour.“
Hopkins & Holloway say “AMBERFIN made by Hopkins & Holloway Ltd, originally was a brown coloured, and cintered Glass.“
So I think that the names are just trade names. But what is cintered glass? Or is it just ... glass?

The same with Regalox, Sintox, Hilox (Hopkins & Holloway) I suppose. Regalox, for example, has been described as “a new man-made synthetic ceramic“. Another one says “vitrified, high aluminia, ceramic“. I think they are the forerunners of the later aluminia oxide guides which are still availible today.

Both groups refer to material types and are used with different styles of guides whereas Hopton, as I undestand, is a particular kind of tip ring. I have always thought a Hopton-style ring to be a stand-off one with an appearance of a “swan neck“. A Match rod guide to me is just a stand-off one. I may be wrong, of course.
Top

Many thanks for the clarification, Stef.
You have sorted things out for me. I will stop worrying, now!
Top

The only things I can add which may help is a little bit more on the Hopton tip ring. The liner is designed to be larger diameter than the actual ring frame which gives a larger friction area and prevents line from cutting the frame when the rod is held at extreme angles.
A Hardy LRH with a Hopton tip. 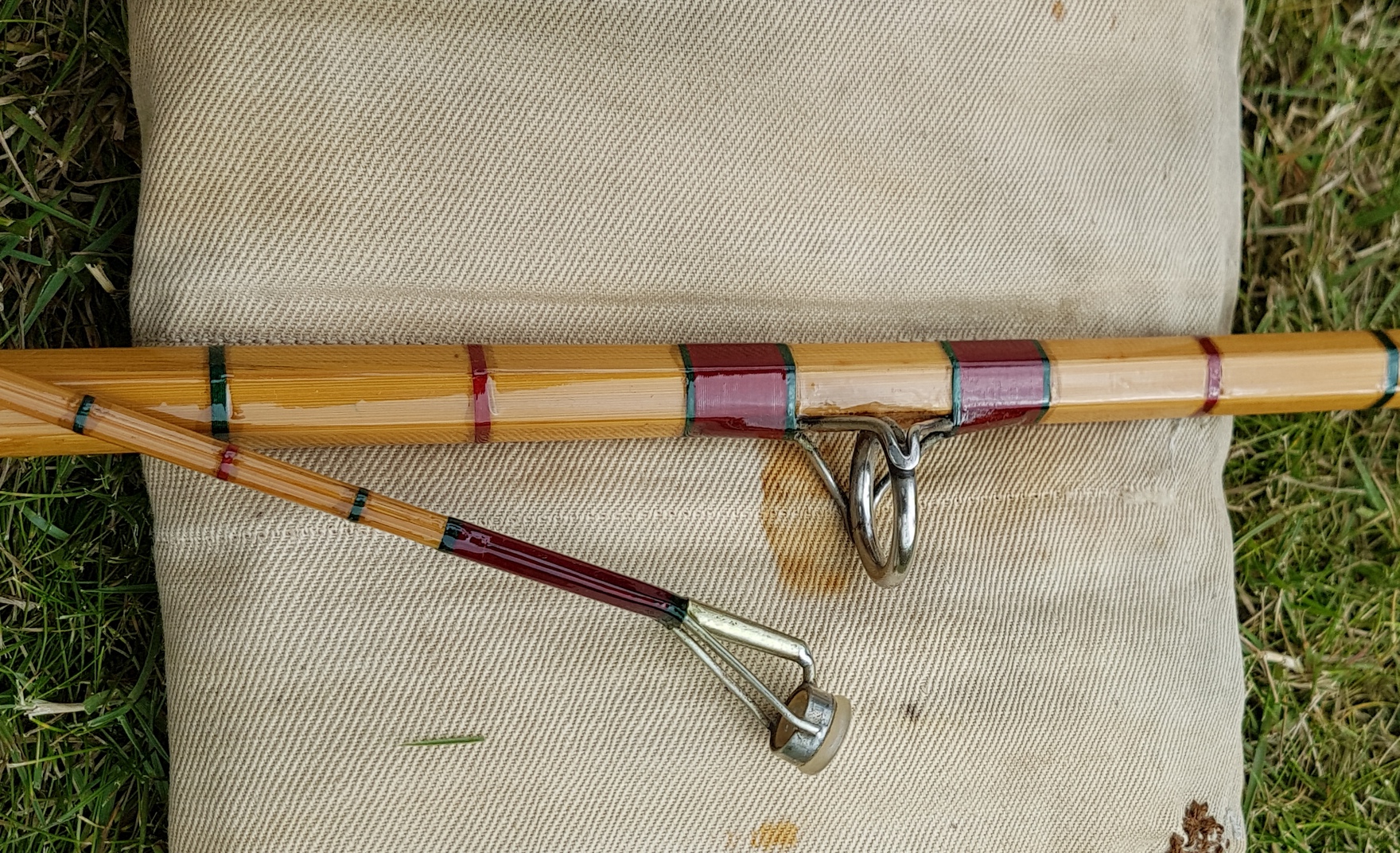 All the variants of glass lined rings are trade names and many were made or supplied by Hopkins and Holloways. Here's a set of Sapphrite Laurels from H&H with Aqualite lined butt and tip rings. 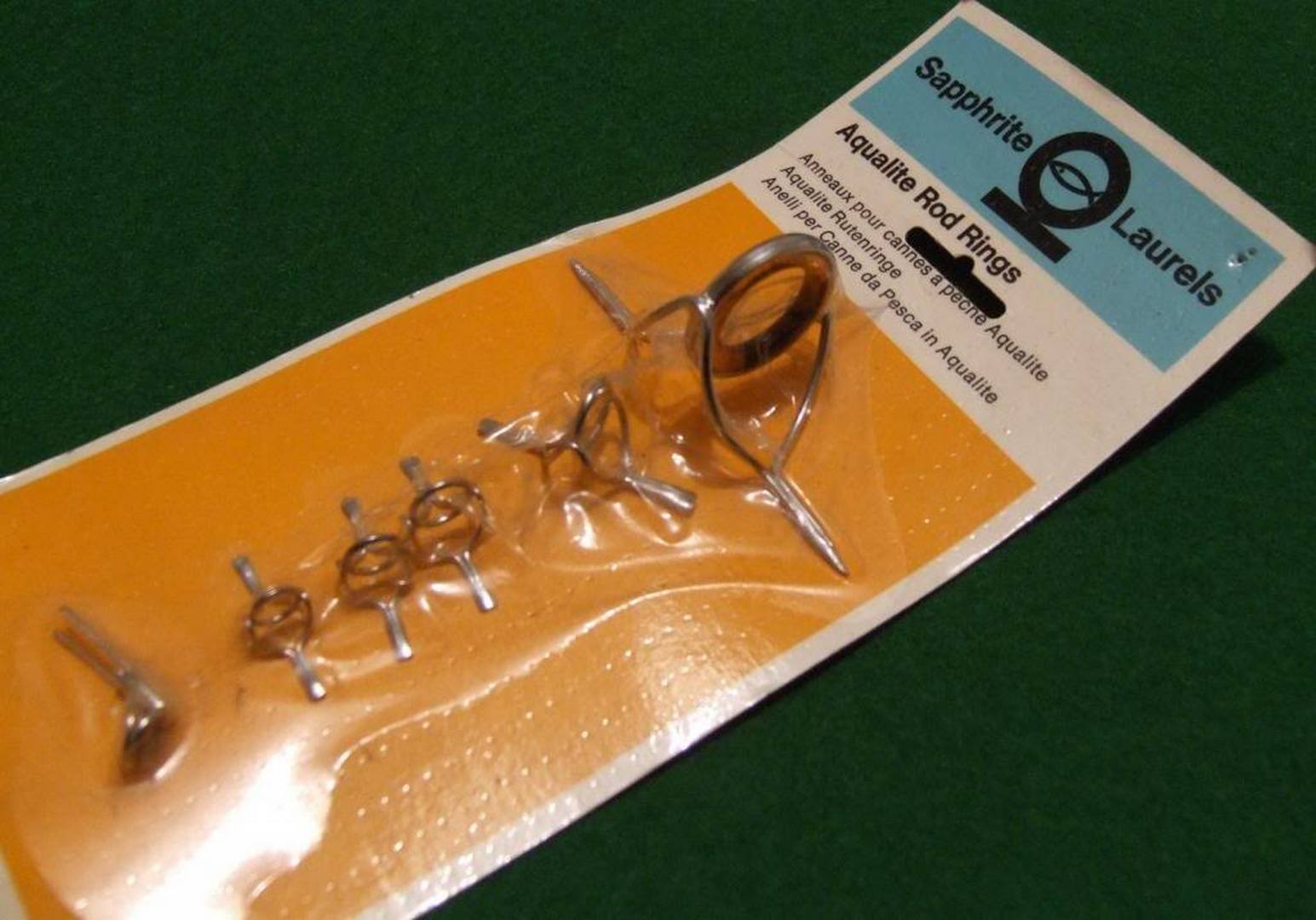 Sintered glass is clear glass with brown or red glass powder pressed into the surface during firing in a kiln. It gives it a striated colour similar to some agates and it does seem to be harder wearing than genuine agate and almost certainly easier to produce in large numbers. Agatine was a trade name used by one manufacturer of sintered ring liners.

The pink Sintox and brown coloured Hardloy are Oxide rings which became popular in the late 70s are extremely hard wearing. Eight times harder than Tungsten in fact so they became very popular on sea rods and as stripper rings for fly rods where constant line friction could make short work of glass or agate liners.

Thanks, Wal. So Aqualite, etc is simply coloured glass, is this correct? I can’t imagine that adding some powder would result in a harder surface, to me it is more likely that they become more brittle. I ask myself if one could use simple glass beads as replacement for the broken ones.
Top

Hi Stef, I am not sure if the added powder gives it more strength or just adds the required colour.
I did try to reduce the outside diameter on a glass insert and it took ages to grind away but it got easier once I was through the smooth outer surface.

Good grief, Wal. You were brave and possibly lucky that the glass didn't shatter due to any irregularity in the cutting disk you used.
I did look up the sintering process the other day but it all went waaaay over my head and made my brain hurt. Thanks, Prof. Wiki!
I have now got enough info to know not to look it all up again when I've forgotten it!
Thanks all for your help - great place this, everyone is so very helpful.
Thank you.
Top
Post Reply
7 posts • Page 1 of 1