Enter this forum only if you dare.
Post Reply
5 posts • Page 1 of 1

After much hard work clearing the woodland surrounding one of our Club lakes I went back, still in the
Close Season, to keep the bonfires going and to watch for the large carp there. They were often to be
found in the shallows above a fallen tree in just two feet of water, their dorsal fins sometimes breaking the
surface.
The water was unusually clear this year and a patient eye could soon spot them. They seemed very
organised, only leaving this pool around one end of the fallen tree and returning to it by the other end.

Here they had to turn on their sides to get under the tree, but they only ever went in the ‘In ‘door and out
the ‘Out ‘door. I was tempted to fish for them here in a few weeks time, but decided against it. They were
sure to bolt around or under that tree and it wasn’t worth the risk of hurting them with the strong line such
stalking tactics would need.

I’d near given up on catching them in open water the year before. They’d spook at a float or even at the
line going down to a leger weight. One feller did catch a few that year, but he’s a more patient man than
me and was prepared to sit in a tent, regardless of the weather, for days at a time and his casting
accuracy was breath-taking, able to cast to a feature and miss it by no more than six inches!

Such dedication got its just rewards after many days at the bankside with a splendid fish of around 24
pounds. And I was lucky enough to be fishing just a peg or two down and saw the whole thing from start
to finish when he got his prize. I felt privileged to help him release the fish back to the water.

I watched these canny fish this next closed season and dreamed of being the next man to hook one, but
it still hasn’t happened to this day.

As I stepped back away from the carp I made my way over to an abandoned old boathouse and looked
out over the water.

Uncomfortably, I slowly realised that I was being watched.

Out in the water, beyond the end of the old building was a large pike. In fact the second largest pike I have
ever seen, easily as thick as my thigh and over four feet long , it was of an unusually dark colour,
practically black.

As I looked at her I had the feeling that I was not safe, that I was in danger, and the hairs on the back of
my neck itched a warning to me.

I noticed that there were seven other pike around her in a circle, much smaller lighter coloured fish
keeping a good twenty feet away from her, but in a seemingly relaxed frame of mind.

Summoning up a little courage I slowly made my way down the steps to the hard standing at the end of the boathouse. As I
did so I was amazed to see the large pike slowly come towards me. She didn’t appear to move her body
at all and must have just coasted over by shimmering her gill fins.

That this fish was aware of me was no surprise, but that she wasn’t afraid of me was! However, when
she actually started to approach me I stopped dead in my tracks. I felt her eyes bore into me and could understand the hypnotised, frozen dread of the prey .

I stood there for perhaps two minutes unable to walk away, aware that I was in the presence of something darkly
intelligent and dangerous.

A few moments later a shoal of darkly coloured bream swam under the pike, along the deep trench at the
bottom of the lake and the spell was broken

I shook my head to clear my mind and walked away, forcing myself not to look back. Every cell in my brain
was shouting at me to run, but I kept my pace steady and didn’t look over my shoulder once. Just.


I don’t want to come back as a Roach in the next life, please. 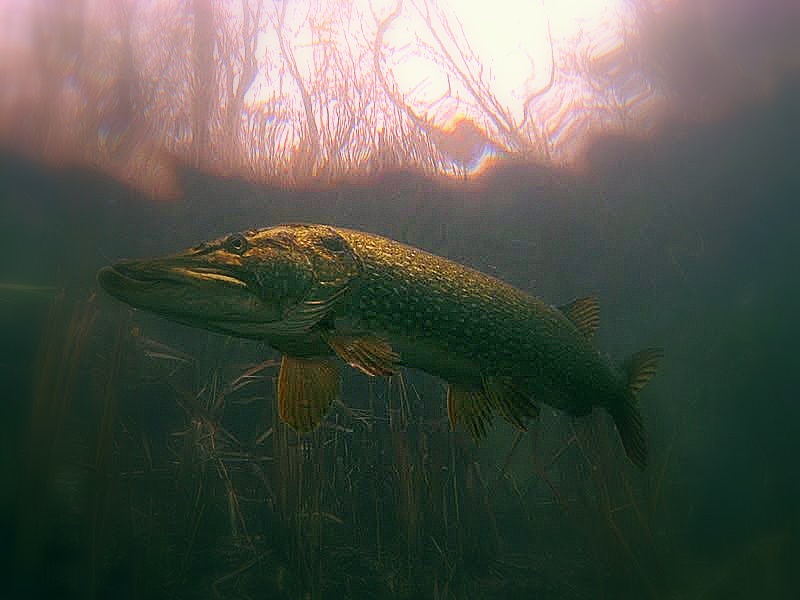 Sounds like a very big old girl Nobby, well worth a herring or two in the autumn

I've never feared a fish but I have been sucked into their world and have lost all track of time and reality.

As for carp being afraid of your line - back leads (or a lump of plasticine), works wonders for them and for barbel come to it. Plus, stick the rod tip under the surface but, the takes can be heart stopping when they come without warning.

Sound's like you have an interesting season ahead of you

I have seen a bigger pike, Dave...at a trout fishery. It looked like a beer barrel. It might be over 40 pounds.

Those carp spooked at Chameleon line in clear water going straight down from the rod tip to the bottom in about 6 feet of water. Before that they had spooked at the sight of a float. I think they eventually fell to pop ups cast from the other side of the lake. That feller camped out on the bank for a week under cammo nets. Not my thing but he was dedicated.
}<)))'> Nobby

Those carp spooked at Chameleon line in clear water going straight down from the rod tip to the bottom in about 6 feet of water. Before that they had spooked at the sight of a float. I think they eventually fell to pop ups cast from the other side of the lake. That feller camped out on the bank for a week under cammo nets. Not my thing but he was dedicated.

I've seen small carp bolt at the sight of a float, which is why, if I use one, I put it well over depth and make sure plenty of line is on the bottom. But a light weight and small backlead near the bank works a treat and avoids the need to cast from the far bank. But, each to their own

Reminds me of when I was about 14 and my first trip alone to the river Ouse at Poppleton near York. I was trotting for roach, and caught several over the day until a lunch time lull in bites, so I decided to stretch my legs and walk along the bank. Within several yards walk I saw an enormous pike sunbathing about two yards from the bank and became very excited indeed. It was at least a metre long, and it just hovered there, kind of asleep. So I quickly set up a live bait to try to temp the beast. Even though I had no idea how I could possibly land such an enormous fish should I hook the thing. Anyway, luckily for me and the pike, it ignored my offering and remained torpid for the next fifteen minutes or so, just lying there as a shoal of roach swam freely a metre or so behind its enormous slowly undulating paddle of a tail. One last effort from me, one last temptation with a small roach trotted within a few inches of its jaws, awakened the lethiathon, and it was mine, I wish! No chance, it simply swam slowly into the depths and out of sight, but not out of mind. Over forty years on I've rarely thought about that pike, and I'm very happy it didn't take the roach, because as a much wiser angler (I hope) I don't think I had any chance of landing it. My landing net wasn't even big enough!

In fact, I'm 110% certain it would have snapped me up good and proper!
"....he felt the gentle touch on the line and he was happy"